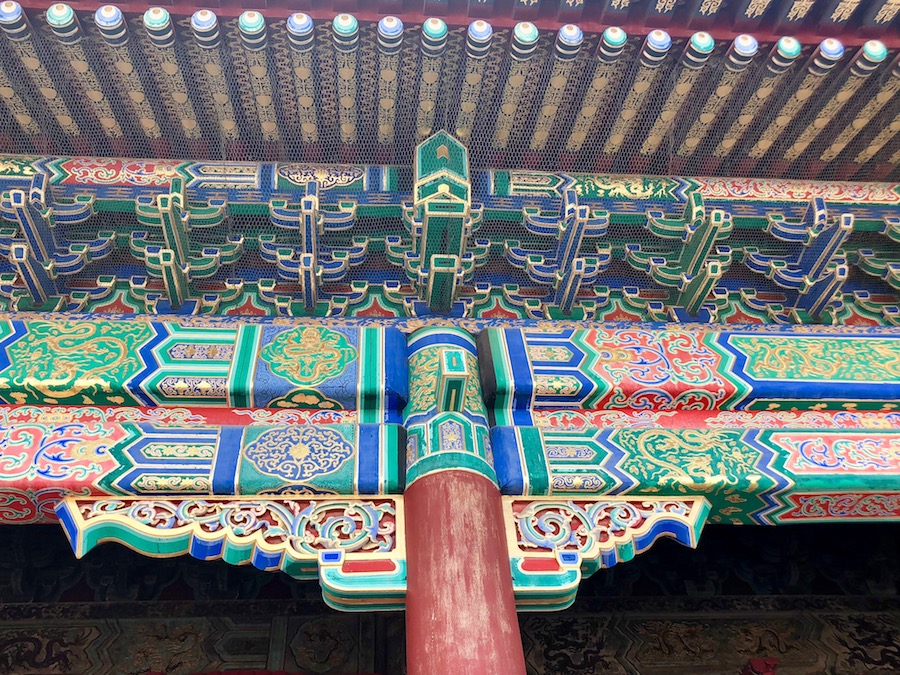 PANDAS!!! And The Forbidden City

How giddy can two adult women get?!?  We were at the Beijing Zoo and about to see Pandas! The first panda was born at the Beijing Zoo in 1963.  They now have a successful breeding program; however, the zoo only has adult pandas.  To see cute, cuddly baby pandas, we will have to go to Chendu – another trip at another time.  But, no matter, adult pandas are still cute.

As we entered the Asian Games Panda House, we were greeted with views of a giant panda enjoying a big breakfast of bamboo.  He/she (can’t recall which) was chowing down but, then again, pandas do a lot of that.  They actually eat up to 14 hours a day ~ the remainder of the day, they sleep and look awesome.  The first two pandas, we saw through walls of glass; however, in the next enclosure, the Olympic Games Panda House, the pandas were outside in the open air – they too were enjoying breakfast.

What more can I say about the pandas?!  I would have happily stood there for hours watching them eat.  They just make me happy.  I had such a silly grin on my face and, I think, Sindy and I were more excited about seeing the pandas than most of the children at the zoo.

After wiping the grin off our faces, we headed to our second stop for the day, the Summer Palace.  Built in 1749 by the Qianlong Emperor in celebration of his mother’s 60th birthday, the palace was built along the shore of a large man-made lake and includes a corridor 700 meters long decorated with hundreds of paintings.

The palace and its associated buildings were destroyed and burned several times over the years. In the late 1880s, Empress Wu Zetian, also known as “the dragon lady,” diverted funds from the navy to reconstruct and enlarge the Summer Palace to celebrate her own 60th birthday. (Can I expect a palace when I turn 60 in a few years?!?)  Now a UNESCO World Heritage Site, the palace grounds, buildings and lake are spectacular and very popular with Beijingers, Chinese tourists and foreign tourists alike.  A boat ride on the lake is a must.

It was already mid-day, so Mr. Lee drove us to Mingfuju, a popular restaurant known for its roast duck and other tasty dishes.  The restaurant is extremely busy, so we had a short wait.  Not to worry, as we waited, we were given vanilla ice pops to enjoy – what great meal doesn’t start with dessert?!

While waiting, we perused a copy of the menu, which made us a little nervous.  Many of the menu translations made us question the choice of restaurants. We weren’t sure we wanted to eat “old sauce and elbow,” “the secret hand tore the chicken,” “sweet potato salad with potted landscape,” “sea cucumber is burning hoofed,” or “Old Beijing makes its own hands and intestines.”  Serena assured us that we would be able to find something great to eat.  We settled on Old Beijing sauce noodles with pork and an order of Happy People Chicken. Everything was delicious.

After lunch, we drove towards Tian’anmen Square. When we got close, however, the square was closed due to the China-Africa Forum taking place throughout our stay.  There was a great deal of security and access was blocked.  We were only able to do a drive-by of the Great Hall of the People, the Monument to the People’s Heroes, the parliament building (completely decked out in national flags) and the Ming dynasty gate where a large portrait of Chairman Mao hangs.

We were disappointed we weren’t able to get out and walk the square. We were glad to stay in the air conditioned car, however, since it was very hot and the sun was beating down.

The last portion of our day was spent at the Forbidden City, the heart of Beijing.  The symbolic center of the Chinese universe, the palace was used by 24 emperors to rule China for almost 500 years.  The massive complex is surrounded by a moat, has outer and inner courts with multiple palaces, living quarters, halls and other associated buildings, and a beautiful imperial flower garden complete with trees more than 300 years old.

The buildings have fabulous names such as the “Gate of Heavenly Purity,” the “Pavilion of a Thousand Autumns,” the Palace of Eternal Spring,” and the “Hall of Mental Cultivation.”  You can identify which buildings were important to the emperor because the tile roofs are yellow (green was used by the prince) and everything relates to multiples of nine – the doors have brass decorations 9 down and 9 across, 9 steps in each flight of stairs, etc.  And, there’s a building for everything.  It’s a virtual city within a city.  Plan to spend several hours within the Forbidden City’s walls, there’s lots to see – and lots of people to contend with.  Surprisingly, we were two of a very small handful of non-Asians touring the site (and all of the other sites for that matter).

By the time we arrived back at the hotel, we were hot, sweaty, and sunburned.  In our effort to pack light we forgot to pack sunscreen.  We checked with the concierge as to the best place to purchase some, but we were met with quizzical looks and a suggestion that we go to the spa.  Up in the spa, which looked lovely and calming, the three attendants who rushed forward to assist were equally as confused.  None of them knew the term sunscreen and our pantomime abilities failed us.

Defeated, we went back upstairs to the concierge lounge to contemplate our situation over a cup of tea and a cookie.  Luckily, the desk agent in the lounge understood what we were in search of and pointed us to a shopping mall down the street, which we hadn’t even known was there.  So, off we went.  What we found was a fairly high end mall, with shops like Armani.

The clerk in the lounge told us that we would find a supermarket on the bottom floor of the mall, but as we headed in that direction, we came across a beauty product emporium.  As soon as we walked in, a sales clerk rushed to help us; however, despite being in her early 20’s, she didn’t speak any English (all children in the past several decades study English beginning in kindergarten).  So, we started the pantomime again – nothing registered.  I finally pulled out my phone and typed the word “sunscreen” into a translation app and showed the resulting Chinese characters to the clerk – a lightbulb went on.  We were, at last, successful in acquiring a tube, albeit a fairly expensive tube, of 50+ SPF sunscreen.

Before leaving the mall, we checked out the Ole’ Supermarket. It has to be the cleanest, most orderly grocery store I’ve ever seen. Not one item looked out of place. The grocery carts were cute too.

On our walk back to the hotel, we stumbled across one of the 3300 Starbucks in China.  We celebrated our sunscreen victory with Iced Green Teas ~ shaken, not stirred.