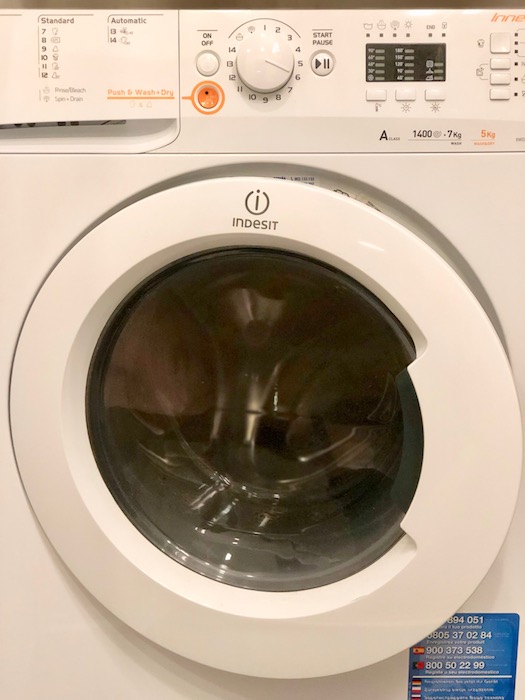 I was so tired last night when I arrived at my Airbnb in Vilnius that I didn’t have enough time to appreciate my new surroundings before falling fast asleep.

Much like my Airbnb hostess, Aneta, the apartment is very nice. It is older on the outside, but the interior is new, fresh, and meticulously maintained. I have a lovely kitchen/eating room with lots of counter space, storage, and all the kitchen appliances needed, and a well-lit living room with a reasonably comfortable couch, enough space to spread out in, and a television. When Aneta’s friend tried to show me how to use the television I declined. I haven’t watched television for almost two months, why start now.

I also have a large bedroom with a king-sized bed and a desk at which I can write, and a large bathroom with a shower. What more does a girl really need?!

I had looked at today’s forecast before leaving for Vilnius, so I knew that there would be storms throughout the day. The next few days after though were supposed to be sunny and bright. With the forecast in mind, I decided that I would take a “me day” so I could write, relax my tired feet, and do a load of laundry.

Before I could relax though, I needed to get some provisions into the apartment such as breakfast and dinner foods, water, soft drinks, and a few snacks. Aneta had told me that the market was literally next door, so I went out to check exactly what she meant.

What she meant is a market/food hall is literally right next door. It was a mini version of the Central Market in Riga with meat/fish, dairy, baked goods, and produce sections. It also has a variety of clothing and soft good vendors as well as several prepared food vendors (making up the food hall portion). No one shouted at me as I perused the aisles (like they do in the souks of Morocco); they were pretty reserved just like the vendors in Riga. Everything looked so fresh and good; there were too many choices.

Back at the apartment, before starting to write, I decided to put a load of laundry in. Yes, I’d done laundry in Riga, but when I have a washer and a dryer (albeit in one machine) at my disposal, I like to keep my clothes clean.

Last night, I had been attentive to Aneta when she showed me which buttons to push. Spoiler alert – it turns out my memory is not as good as I would like to believe. I put the laundry detergent in the proper slot, closed the tray, pushed the buttons Aneta had showed me last night (or so I thought), pushed start, and went back to the bedroom to write.

About ten minutes into the load, I heard a thumping noise over my music. It sounded like it was coming from the washing machine. I got up, went to the bathroom where the washer/dryer is and peered in the black abyss of the machine – no noise. Maybe I was hearing things. I went back to the bedroom, started up my music, and began writing. Several minutes later, I heard thumping again. I shut everything down and went to gawk once again at the machine wondering what I had left in my pockets making such a racket. But again, there was no noise. A little bewildered, I returned to the bedroom. This cycle would be repeated a third time.

Just as I was hitting play on my music for the umpteenth time, my WhatsApp rang with an international number I didn’t recognize. For some reason, I picked up anyway. It was Aneta inquiring as to whether I was in the apartment. She had been knocking on the door over the past 10 minutes, but I hadn’t answered. Feeling like an incredible dope, I hurried to let her in to get the blankets she needed for her other rental unit.

She and I had a big laugh over me thinking that the washing machine was knocking. Had I thought about it then, I should have shown her the settings I was using on the washer/dryer, but I was not yet wise to my situation

Aneta left, I resumed my writing, and my laundry continued. Bing! The washer/dryer sounded and I went to remove my nicely washed and dried clothes, but they were soaking wet. The dryer portion of the unit hadn’t done its job. I pushed the button I thought controlled the dryer and hit start. The door on the unit clicked, locking my clothes inside – and then water started pouring into the machine and on my already wet clothes. That wasn’t supposed to happen, so I did what anyone with higher education and an advanced degree would do – I started pushing buttons … all of the buttons … several times … in different combinations. Things were lighting up and then shutting off and then turning back on again as if the machine was possessed. Through it all, the unit door never unlocked – my clothes were being held captive.

I know that I should have called Aneta earlier on in the situation, but I had already embarrassed myself once and figured she would wonder what kind of idiot she’d rented to. Just as I was about to give up and call her, the washer/dryer went Bing!

I had already decided that if I ever got the machine to release the door, I would just hand wash my clothes. I didn’t need to. When I opened the door, my clothes were very clean, steaming hot, and dry. I almost wept with joy. Somehow I had prevailed. Although I’d seemingly won the battle, I felt like I’d lost the war. Who knew laundry could be so emotionally taxing.

[Note: After this experience, one would think I would give up on keeping my laundry up to date. Nope. My second attempt resulted in clean, but soaking wet clothes – I hung them around the apartment to dry. My last attempt resulted in clothes that were partially dry but also needed to be hung up to dry. There will be no further attempts, as I don’t have enough time before I leave to let things air dry if needed. The machine has, in fact, won the war.]