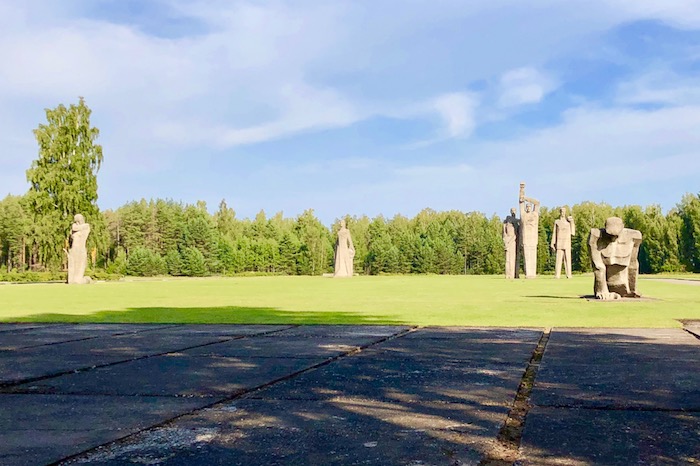 During my research on how to get from one city to another on my trip, I came across a company, Traveller Tours, running van tours from Tallinn to Riga and from Riga to Vilnius (and returns). The idea is that the van takes you from point A to point B, but in between, it stops and takes you to different sightseeing places along the way. So, you get to go to some off the beaten path or further afield locations that you’d miss if you took the train or a plane.

I bid adieu to my lovely apartment and walked into the heart of the old town to meet the van and other passengers in front of a local hostel. It turns out, there were so many people going to Vilnius, that there were two full vans going. There was also one full van going from Riga back to Tallinn. Looks like the company has a good business model on its hands.

The driver/guide of the van to which I was assigned was Ruta (really don’t know how to spell her name, sorry to her if I botched it). She was a newly married (one week) young Lithuanian woman with lots of knowledge she was ready to impart on us throughout the day. She was very nice, funny, and, most importantly, a very safe driver.

I shared the van with two couples from Hong Kong – the gentleman sitting in my row was the only one of the four who spoke English; a couple from Hamilton, Ontario – yes, we bonded over talk about Canada; and a young woman from the Carolinas who works in DC and was on several of my free walking tours. My seat was in the middle of the center row. Here’s my view:

Our itinerary set forth for us, our van headed out jut a little ahead of the second one. Our first stop was about 30 minutes outside of Riga in Salaspils, the site of a political/military prisoner camp run by the Nazis from 1941-1945. As we walked towards the memorial established for the victims of Fascism, Ruta gave us the readers digest version of Latvia and Lithuania’s history during and after WWII (Nazi and Soviet times). The major takeaways are: Latvians never give up, everyone hates Stalin, and Nazis and Soviets were excruciatingly horrible to anyone who didn’t believe the way they did. Through atrocities and the worst of situations, the Baltic countries kept their pride and spirit. On August 24, 1989, more than 2 million people joined hands for the Baltic Way – a chain of people stretching from Tallinn to Riga to Vilnius in solidarity. Lithuania finally gained its freedom on March 11, 1990, Latvia on May 4, 1990, and Estonia on August 30, 1990.

More than 20,000 people rotated through the Salaspils camp, including small children. At least 2-3,000 of them died there due to illness, starvation, and inhumane treatment. Many more died in the camps to which they were transferred. The Salaspils monument was created in 1967. As you walk down a long pathway, there is a 100-meter long structure crossing over the path, which represents the border between life and death. On the wall is written (loosely translated) “the land beyond moans.”

Passing under the wall, you enter a large clearing in an otherwise densely wooded area. There are memorials, a newly discovered graveyard, and several monolithic sculptures.

The sculpture in the foreground is entitled “The Unbroken.” The Soviets saw it as a tribute to the unbroken spirit of the motherland; however, it was actually intended to show how the Latvian spirit was never broken even during occupation. The sculpture that the Soviets believe showed the solidarity of its forces actually honors the Latvian Resistance (titles are Solidarity and The Oath). The other sculptures are entitled The Mother and The Humiliated.

The statues are enormous and very powerful, collectively and separately. The stillness of the forest sets the stage for a haunting remembrance. As I drew nearer to a memorial off to the side, I heard a rhythmic sound. Later research revealed that the sound is a metronome, but as I stood in front of the daunting black granite slabs, it reminded me of a heartbeat, never-ending and unbroken. It added even more to the intense experience.

An hour’s drive from the memorial, we arrived at Rundale Palace.  It was built during the 18th-century Russian Empire times and was once given by Catherine the Great to the younger brother of her lover – nepotism at its finest.  The design was influenced by the Palace of Versailles, but now it doesn’t equal the grandness.  The palace was destroyed several times, left in ruin, and during post-war Soviet days, it was used as grain storage.

Plundered of its riches, the interior of the palace is pretty stark.  Restoration has slowly brought back some of its character but it has a long way to go before it emulates its glory days.  Excavation and restoration work has uncovered many artifacts, which are on display in the basement.

The palace’s crowning glory is its gardens, including the rose gardens situated in the front portion of the French garden.  The rose gardens contain 2,230 varieties of roses, 600 of which are historical varieties.  While peak rose season is not upon us, there were enough in bloom to see how spectacular the gardens would be during the height of the season.  The entire gardens total 85 hectares, 10 of which belong tot he French Baroque garden.  The garden layout is the original design from the plans drawn up in 1735 and the palace’s garden is the most historical in the Baltics.  I’d love to see it in the springtime.

Just over the border in Lithuania, we stopped for lunch at a restaurant named Audruvis.  While it’s an authentic Lithuanian restaurant, it is also a horse farm and riding venue.  I didn’t get to see any of the horses, which was good for my allergies, but I did have a great lunch of Greek salad and meat-filled dumplings with sour cream.  My dumpling quest continues.

The restaurant also has a conference center in the back, which looks like a really cool place to have an event, as long as you don’t mind being out in the middle of nowhere.

A half-hour from the restaurant, we came to the town of Siauliai, where, just outside of town, the Hill of Crosses is located.  This was the one top that I was really looking forward to.  Although it is difficult to determine when the first cross was placed, many believe it was after the Polish/Lithuanian uprising against the Russians in 1831.  Mourners had no place to grieve for loved ones, so crosses were erected in the location of an old sacred pagan site.

During the fight for independence in the early 1900s, the hill became a place to pray for peace and honor fallen soldiers/fighters. During Soviet occupation after WWII, the Hill of Crosses became a battleground of wills. The Soviets would bulldoze the area and more crosses would return. Lithuanians used it as a show of resistance honoring their true heritage and identities. Pope John Paul II visited the Hill on September 7, 1993, declaring it a place of hope, peace, love, and sacrifice.

It is an amazing place that defies words (or photos). It is unknown how many crosses there are but the estimate is over 500,000. The magnitude of the area is awe-inspiring. I could have spent hours wandering the paths marveling at the layers of crosses, religious statues, rosaries, and other icons. However, we were on a schedule and it began to rain.

It rained for the better part of 90 minutes, making driving conditions less than preferable.

By the time we reached Kaunas, Lithuania, the dark clouds were receding and the sun had returned.  Kaunas, our last stop before Vilnius, is the second-largest city in Lithuania and was the temporary capital of the country when Vilnius was seized by Poland from 1920-1939.  The old town has pretty streets lined with cafes, and a lovely town square complete with lofty buildings, a pink church, and statues.  Just down from the square, there are fine examples of both gothic and baroque buildings.

The largest gothic building in Lithuania is the Cathedral of St. Peter and st. Paul, which began construction in the 15th-century.  Gothic on the outside, the interior decoration is anything but – it’s entirely baroque.  Currently undergoing restoration, its beauty is not hidden by the scaffolding and tarps.  Mass was underway when I entered the church, so I wasn’t able to take as many photographs as I’d like, but I got a few good ones.

On my way to find the Kaunas castle, I passed a monastery, which is currently active.  I was told that the monastery runs a small tourist hotel.  I’m sure it would be quite an experience to stay there.

Only about a third of the 14th-century medieval castle and its fortifications are standing.  It houses a gallery and a small museum, but it’s also the perfect backdrop for a picture of the Kaunas city sign.

A little over an hour after leaving Kaunas, we arrived at Cathedral Square in Vilnius, our final destination.  After saying goodbye to my van-mates, I ordered a ride from Bolt to my Airbnb.  I was dropped at the address I had been given, but it appeared to be a restaurant.  About 10 minutes later, Aneta and her friend greeted me and took me through the gate to the right of the restaurant into a courtyard where the apartment was located.

Aneta and her friend were very gracious, gave me the lowdown on the apartment, and left quickly so that I could get to bed.  It was a great day and a wonderful way to get from Riga to Vilnius, but I was beat from a full day on the road. 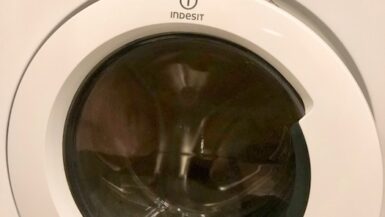 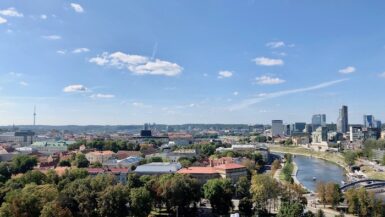