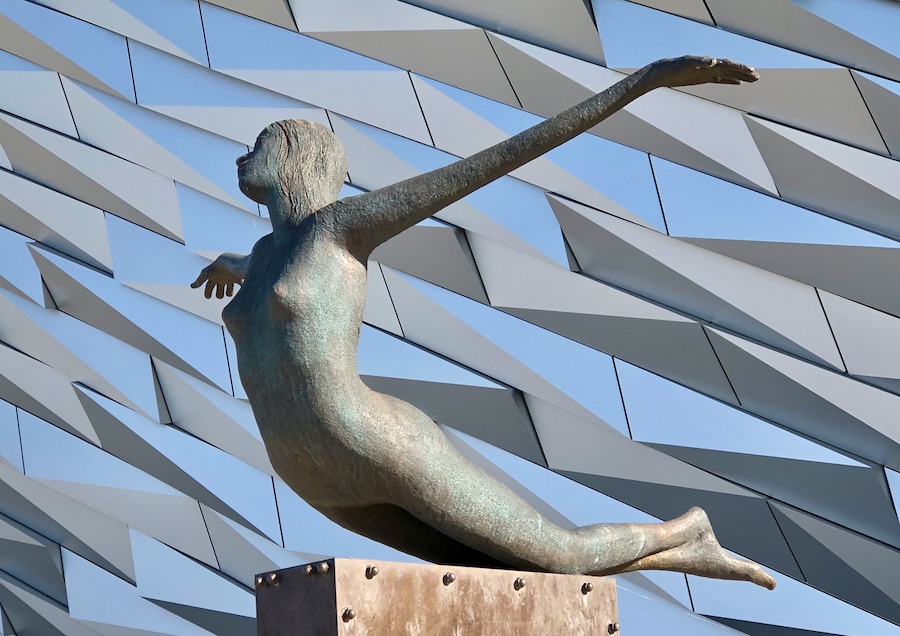 The Titanic – The Safest Ship On The Seas

Touted as the grandest and safest ship on the seas at the time, the Titanic sank to the bottom of the ocean in less than two hours only five days after embarking on its maiden voyage in 1912.  1,517 of its passengers and crew perished, a disproportionate number of them from the 3rd class compartments.

Belfast’s shipyard was the birthplace of the Titanic and each of the other Olympic class ships built for the White Star line.  Although everyone hears about the dastardly iceberg that caused the ship, unless you visit the Titanic Museum or do a deep dive into information on the internet, you probably won’t hear that several other culprits may have been involved.  It’s always about that darned iceberg.

The Titanic Museum was designed and built in 2012 for the 100th anniversary of the tragedy.  Its futuristic design resembles the bow of four ships joined in the middle and the etched aluminum panels on the exterior reflect the water of the channel in front of the building giving the illusion of waves.  It’s a very striking building.  The sign standing in the front (the site of many a selfie) is cut from a 2.5 cm thick steel plate similar to those used in the construction of the Titanic and weighs 16 tons, the weight of the ship’s forward anchor.

Inside, the building is five stories of interactive exhibits detailing the industrial revolution that occurred in Belfast, including the the marvels of shipbuilding, the building of the Titanic itself, the launch, the ultimate tragedy and the aftermath.  Go early (or late) if you want to avoid the crowds, particularly if a cruise liner or two is in port.

I was able to take my time through the exhibit halls because I was the first person in the museum.  My hotel (the new AC Hotels by Marriott) was across the bridge and a short walk away, so I was standing at the door waiting as the security guard opened it.  The people working at the museum are the most pleasant group of employees I think I’ve ever met.  Several times throughout my stay, a member of the museum stopped to ask if I was having a good time and did I need anything or further information about any particular subject.  Their work ethic was quite refreshing.  The only thing I didn’t like about the museum was the “ride” that swung you around to various screens to show you how Titanic was built.  I thought it was a bit unnecessary based on everything else available in the exhibition.

After visiting the museum, I now know that there is way more to the story than the iceberg and what we’ve come to believe from the movies.  We will never know what really happened on the bridge that fateful night.  Was Captain EJ Smith negligent in turning a deaf ear to various warnings from other ships about icebergs in the area?  (There were other ocean liners within a 50 mile radius who had safely avoiding them.)

Were some of the over 3 million rivets that secured the metal plates of the Titanic forged from inferior materials allowing the hull to crumple and break apart during the collision?

Or did the chairman of the White Star Line, J. Bruce Ismay, demand that the Captain push the limits of the Titanic in an effort to be faster than all the other steamships?  Plenty of inquiries were held and blame was placed in the days after the tragedy (most blamed Ismay, who was one of the survivors), but we will never really know.

We can remember the heroes though – some who lived, and many who died.  Everyone knows the unsinkable Molly Brown, who helped survivors in her lifeboat (many a 1st class passenger did not help and some even tried to bribe the lifeboat crew to launch before their boat was full).

But did you know that, after the Titanic struck the iceberg, Wallace Henry Hartley, the ship’s band leader, and his musicians played in the first class lounge to calm the passengers.  As the ship sank, they performed on the deck as passengers and crew were loaded onto lifeboats.  None of the band survived.  That’s dedication.

Since I was in a history/learning mood, after the museum, I took a walk back toward city center to the City Hall.

I’d heard that there was a good exhibition on the history of Belfast and a free tour of the City Hall itself given a few times each day.  I was able to put my name in for one of the afternoon tours and, with time to kill, I decided to have an inexpensive lunch at the cafeteria (a recommendation from the Rick Steves guidebook).  Unfortunately, when I ordered my soup and salad combo, I forgot that my definition of a salad and the reality here do not jive.  Salads here don’t necessarily mean “green salad,” which I should have realized when the lady behind the counter said that she’d “fix me up a mixture.”  I believe I got three little lettuce pieces, two slices of cucumber and a tomato slice along with heaping portions of noodles and cole slaw (heavy on the mayonnaise).  Can I just say that I am craving a big healthy salad with no dressing right about now!  The soup wasn’t great either, so lunch was pretty much a non-starter for me.

Anyway, the tour of City Hall certainly was all that it was claimed to be – insightful and informative.  We were taken behind the scenes into the Council Chambers to sit in the council men/women’s seats (we weren’t allowed to touch their microphones or open their desk drawers), given a first hand look at the very expensive robes they wear on formal occasions (they cost over 2,000 pounds a piece), and given access to the inner reception rooms and hallways dedicated to former Lord Mayors.  The tour guide was a great storyteller and was able to answer all of the questions from our very inquisitive tour group (why they asked some of the questions they did, I’m not sure).  I took myself on a self-guided tour through the exceptional exhibition on the ground floor to learn more about Belfast’s history.  I recommend it highly.  Oh, and did I mention that the City Hall is absolutely beautiful inside and out?

After all the history I stuffed in my brain, I was in need of an afternoon nap – it’s becoming a habit.

Since I hadn’t eaten much of my lunch, I decided to splurge on a burger or, gasp, maybe even fish and chips for dinner.  I headed off to find a restaurant that looked promising based on its Yelp reviews, but never found it.  What I did find though was an impromptu drum concert on a street corner.

Earlier in the day, I had heard the rhythmic beat of drums, but couldn’t find the source.  Well, I ran across them while looking for the restaurant.  I’m still not sure who they were, whether they were a group or backing a cause, but they were entertaining and definitely stopped foot traffic in the area as everyone whipped out their smartphones for pictures and video (me included).

With no particular restaurant now in mind, I just started walking.  I looked down an alley way, saw a cool mural and statue and wandered into what turned out to be a “hipster” hotel and restaurant.  I decided on a vegetarian dinner of an appetizer of burrata, sourced from County Cork, with cherry tomato confit, figs and dukkah (North African blend of spices and nuts), and a main course of harissa roasted cauliflower accented with pomegranate seeds, golden raisins and lentils.  My pictures do not do these two dishes justice as they were both down right delicious, although the burrata did need just a dash of salt to bring the flavor to its peak.  Although extremely tempted, I didn’t indulge in pavlova on the dessert menu even though it came with strawberries and pavlova is one of my all time favorite desserts.  I will count this non-indulgence as another NSV.

The sun was finally setting as I left the restaurant; it was nearly 10:00p after all.  The city took on a beautiful glow as the lights began to flicker on.

I got a little turned around and did an extra lap around the city center, through the Victoria Station mall (fabulous glass dome and viewing deck) and then finally got my bearings when I spied the big blue fish off in the distance.  It’s good to have a landmark to get you centered.  Back to Dublin tomorrow.

EXTRA – Just a little more info:  Did you know that the Titanic’s sister ships, the RMS Olympic and the HMHS Britannic, were also doomed?  The Olympic, under the command of Captain EJ Smith (the captain who went down with the Titanic), collided with the HMS Hawke and had to return to Belfast to be pieced back together with parts from the Titanic, which was being built.  After many years of faithful service to the British government, it was once again in a collision in 1934 where lives were lost.  The ship limped back to Belfast and was stripped apart.  The Britannic, after being launched in 1914, was requisitioned in 1915 by the government as a hospital ship before it could be fitted out as an ocean liner.  It spent 11 months in service before it hit a mine in the Aegean Sea and sank like a stone just as its sister had, but without the catastrophic loss of life that occurred 4 years earlier. 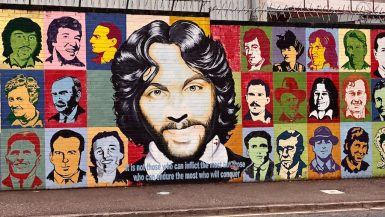 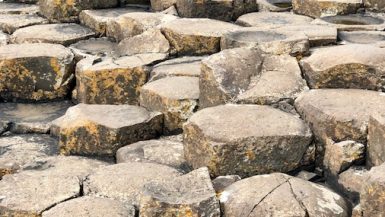 Nothing But A Big Baby – A Giant’s Causeway Tale