Some Days Are For Chillin’

As I got ready for bed last night, I felt the beginnings of a tickle in my throat and a bit sniffly.  When I awoke to a dreary, rainy morning, I was in full blown head cold mode.  I went the hot tea and honey route at breakfast and, since it was drizzling, made a good choice in taking a taxi to the train station instead of walking as I had intended.  By the time I got comfortable in my seat on the train (opting for first class again to give me some space), I was feeling pretty miserable.  Luckily, the ride to Dublin was only going to be two hours.

I had been spoiled by the peace and quiet of my train ride up to Belfast because there were only a few passengers in my coach and they kept to themselves.  Unfortunately, on this trip, a rambunctious quartet got on just in front of me and wouldn’t you know, they had reserved the four seats right beside me.  They proceeded to carry-on their conversations using their loudest outside voices and, as soon as the conductor came by to check tickets, they whipped out a bag ‘o alcohol and drank all the way to Dublin – it was 10:00a in the morning.

They played drinking games and told raucous stories the entire way.  I kept checking to see if there was anywhere else in the coach I could move, but there really wasn’t – I was stuck.  I could even hear them with my noise cancelling headphones on and my music up as loud as my pounding head would allow.  That was the longest two hours and I was glad when we pulled into Connolly Station in Dublin.  They left their seats a mess.  Now you might think that these four were on their way to a stag or hen party since, after all, it is Friday.  But, you would be wrong; they were two couples in their late 60s, early 70s coming down to Dublin for a little day trip of sightseeing.  Yikes.  I hope they weren’t getting on a tour bus – I pity the tour guide if they did.

Anyway, once clear of the station, I flagged down a taxi (Uber is not really Uber in Dublin) for a ride to my new accommodation at the Holiday Inn Express Dublin City Centre.  My driver was a colorful character and not afraid to tell me his stance on the current state of politics in Europe and the USA, the issue of homelessness and unemployment in Ireland, the level of corruption in the Garda (police), and the level of alcoholism in Ireland (which happened to be the topic of the day on the talk-radio station he was playing in the taxi).  All this in a less than 10 minute ride from station to hotel.  I was exhausted from listening to him and was happy to make it to the HIE.

Elite status has its perks when the front desk staff moves heaven and earth to get your room ready within minutes of your early arrival, particularly when you aren’t feeling well.  After dropping my stuff in my room, I took a quick walk down to the Tesco to pick up cold medication, liquids and a snack, and then back to my room to snuggle in.  Thank goodness I had nothing planned for the rest of the day other than to wander around town.  Sometimes, you just have to take a day off to give yourself time to chill and feel better.

I didn’t feel like going out to get dinner, and I had eaten my snack earlier, so I decided to grab a bowl of soup from downstairs in the hotel.  While one of the staff was fetching my soup, the bartender decided that I needed a big mug of warm milk with honey because that’s what his mum always gave him when he is sick.  So I was sent back upstairs to my room with soup and the warm milk concoction.  Not sure it made me feel any better, but it was mighty sweet of them.

So since I didn’t do much today, didn’t take any photographs, and don’t have any witty stories to impart, here’s a selection of photos I’ve taken over the last week of street art in Dublin and Belfast.  Enjoy… tomorrow I’m off to the Ring of Kerry. 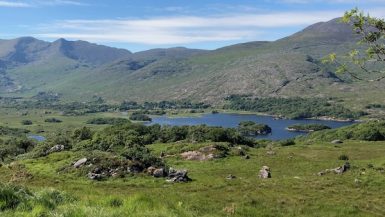 Mother Nature In All Her Glory – The Ring of Kerry