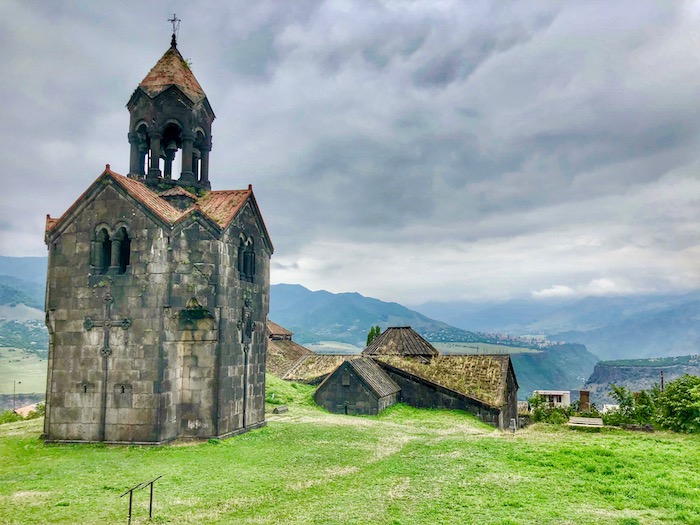 A Day In Armenia

Until yesterday, it didn’t look like I would be able to get to Armenia on this trip. Luckily, another individual booked while I was away on my day trip to Davit Gareja and by the time I returned last night, the trip was a go. Yay!

Our guide for the day into Armenia was Qeti from Envoy Tours, the same guide from a couple of days ago (raspberry-colored hair).  She’s a lot of fun and full of information.  She’s also a firecracker as we’d find out later.  As far as others, Rhodri from Ireland by way of Wales was also on the trip (our 2nd together), as were new guests Andrew from Melbourne and Sini from Finland.  The last member of our group was Alison, also from Melbourne; she was on the trip as far as our return to the Armenian border, then she was meeting a shared taxi to continue on into other parts of Armenia.  It was an interesting group with lots of travel experience amongst us.

Off we went in the Envoy van to the Georgia-Armenia border.

On the way, we noticed a lot of pop-up stores selling laundry detergent and other cleaning supplies. Qeti said that these types of products are really expensive in some of the other surrounding countries, so entrepreneurial types have decided to sell them alongside the road to the border. I wonder if someone buys in bulk and sells for higher once they get into the other countries.

Getting through the border check on the Georgian side was a breeze; then we queued up at the next border check to get across to the Armenian side.  That’s when the fun began.

Although there were four designated lines, it was a mob scene.  There was lots of pushing and shoving and attempts to cut the really non-existent lines.  Excuses for cutting in front of us were:  “I’m old,” “I have children,” “I’m late for an airplane,” “my brother isn’t feeling well (the brother was a man in his 40s),” and various other lame rantings.  Some people didn’t even wait to give an excuse, they just casually walked around the side of the crowd, pushed in front of the line and handed their passport to the officer.  One woman who had shoved her children and herself in front of us, much to Qeti’s vocal dismay, began talking and flirting with the two officers in the left two lanes (we were in the furthest one from the left), which was taking way too much time according to the group behind us.  They started yelling, the woman yelled back, the officers yelled, then others at the back yelled – it seemed everyone had something to say.  That was until another official-looking man came out and made everyone straighten the lines a bit and calm down.

After about 40 minutes, it was our group’s turn.  Unfortunately, it seemed we were under a bit more scrutiny because the aforementioned woman with children hadn’t been happy with us for not wanting her to cut the line and because Andrew travels with two passports.  This all seemed to confuse the new officer and nearly shut down our line (people behind were not happy).  It took 5-10 minutes to get all of our group members through.  We breathed a sigh of relief as we passed through the final doors.  We were in Armenia.

Almost immediately, the landscape changed.  It was more mountainous, green, and wild looking.

The roads were terrible (that would remain throughout the day) and Soviet-style housing dominated the small towns we saw along the way.  While the infrastructure seemed to be lacking, the Internet service was stellar most of the day.  Northern Armenia was known for its copper mining.  The mines were operational until recently, but now all of the mines and factories have been closed.  Entire towns lost their sole source of income.  I’m not sure how the people survive, but many plant gardens, eating what they grow.

As we walked through the fortress walls of the Akhtala Armenian Apostolic Church Monastery, we saw a priest giving instructions to an old gardener while he (the priest) talked on a cell phone.  It was an interesting blend of new and old considering the backdrop of the 10th-century church.

The main church in the compound is Holy Mother of God, which used to contain the cross of John the Baptist that, according to legend, was used during the baptism of Jesus.

The church is most famous, however, for its colorful frescoes that cover the walls.  They are said to be one of the best representations of Byzantine art outside of Byzantium.  Faded and damaged through the centuries, one can only imagine how magnificent they were when they were new and fresh in 1216.  Photographs don’t do justice to the beauty of the frescoes.

Back outside the church, there were numerous interesting monuments and crosses in the yard surrounded by the crumbling fortress walls.  A nod to the new was a sculpture of what appeared to be wedding bands.  According to Qeti, it is considered good luck for a newly married couple to pass through the rings.  It’s also a good photo opp.

The next monastery, Haghbat, a UNESCO World Heritage site, was a major center of learning in the medieval period.  Built in approximately 976, it is a complex of several churches and other buildings.

As we came into the compound, Qeti pointed out one exterior wall of a church that has been dubbed “the wishing wall.”  If you can walk along the bottom edge of the wall, which is mere inches wide, from end to end, your wish will come true.  Although several of our group tried, no one succeeded in going the length.

One of the buildings is a vast space with four large pillars supporting a dome; it had incredible acoustics.  We took turns singing into the darkness.  It was Rhodri’s rendition of a Welsh song though that swelled our hearts – such beautiful sound swirled around the room.  It was quite a moment.

I was captivated by the carvings on the walls and pillars of the churches,

and the pastoral views outside on the grounds.

The main church is the Cathedral of Surb Nashan.  Although relatively barren inside, there is a portion of a fresco of Jesus in the nave behind the altar.  I believe restoration has begun and I only hope more of the frescoes can be brought back to life.

It is difficult to describe the feelings I had as I stood among such history.  While the churches and other monastic buildings were dark and somber having suffered so much through the centuries, its setting on the side of a gorgeous green hill with views for miles gave a sense of beauty, light, and hope.  I was filled with a kaleidoscope of emotions.  Sappy, I know.

We were on an Envoy tour, so that meant lunch at a local home.  As we walked down dirt lanes from the monastery, we passed several old Russian vehicles abandoned in the lanes (and chopped up sitting on porches).

We passed through a rickety old gate, into a rose garden and were greeted on the balcony with a delicious spread of food direct from the hostess’ garden (plus some barbecue pork).  For once, no alcohol was involved – we drank pear lemonade.

The food was fantastic and so fresh.  Highlights included the vegetable patty, homemade yogurt, cheese, and a tomato sauce/salsa that should be bottled and eaten on anything and everything.  Whatever leftovers remained (there wasn’t much) were packed up for Alison to take with her on her journey later in the day further into Armenia.

As we turned our sights to returning back to the border, we took the well-worn roads up to the Sanahin Monastery situated on the other side of the Debed Canyon from Haghbat.  It is also a UNESCO World Heritage site.  Founded in the 10th century, it is a part of the Armenian Apostolic Church.  It seems the Sanahin and Haghbat monasteries may have had a rivalry because Sanahin translates to “this one is older than that one.”  The two monasteries were built about the same time, but apparently, Sanahin may be a bit older (10 years or so).

As with the other monasteries, there were many gravestones within the walkways.  Although I’ve always been taught not to walk on them, here it is desired as it is said that walking on the graves of the dead stomps away the sins of those who are buried beneath.  Interesting concept.

Again, the churches of this monastery were dark and solemn.  A bright spot was a painting of the Virgin Mary and baby Jesus that is more ethnically correct for the area.  Both Mary and Jesus are depicted with Armenian or Persian features.  The painting is quite lovely and maybe more correct than most renditions.

As always, the chandeliers and carvings fascinated me.  I can’t seem to get enough of them as is apparent by the number of photographs I have taken.

And then it was back towards the border.

We stopped a little short at a convenience market, the meeting point for Alison’s shared taxi.  I felt a little odd leaving her at the side of the road without knowing if the taxi was on its way, but I’ve since seen on social media that she made the connection.

As we approached the Armenian border, we speculated whether we would have the same difficulties leaving as we did coming in.  The consensus was that as long as we didn’t get the same officer, we should be good.

We entered the all but empty building and began walking up to where the officers were sitting.  One of the officers stared unbelievably at us and us back at him – it was the same guy.  Then he started to laugh, apparently amused at the situation.  I’m sure he was glad to get rid of us, as he stamped our passports in record time and waved us through.  The last stop at the Georgian border was equally quick – one of Qeti’s friends was the border officer, so there was no trouble.  We made it back into Georgia.

My overall feelings of my day in Northern Armenia?  It is a country that has seen so many struggles, but I believe that people are ready for a change and are determined to make a new life for themselves and future generations.  It is a beautiful country with lovely, hospitable people.  I can only imagine what Armenia will look like in 5-10 years.  I hope to return to see the changes.  I recommend visiting and look forward to seeing other areas of Armenia on future trips.