When I arrived at the hotel, I had a conversation with the gentleman at the front desk about public transport and, more importantly, which public transport I would need to take to get to my first free walking tour.  I had it all planned out, then I asked for change at the front desk this morning and the young woman told me that I needed to take the train, not the metro to where I needed to go.  Same price, but different routes.  She showed me everything on the map, so I took her word for it and headed out.  Luckily, the station for the train and the metro is just down the street.

I figured out how to buy a ticket, got myself to the correct track and waited just a few moments before getting on the train.  I rode it two stops to the main train station.

Out the door, I found myself across from the entrance to Tivoli, Europe’s second oldest amusement park.  Everything was closed (I was early, as usual), so I put it on the back burner for another day and made my way to the tour meeting point.

The streets were pretty empty of people since it was Sunday morning, but they weren’t empty of trash – it was everywhere.  Obviously, last night’s Pride party was a big one and it didn’t look like trash cans had been too plentiful because it was strewn all over the place.  The main party was held in the square in front of City Hall – exactly where I needed to be to meet the tour.  It smelled like a bad brewery and looked even worse.  I felt sorry for the city workers who were picking up trash, they are certainly making their wages today.

Our guide this morning was Jarod of Copenhagen Free Walking Tours – an extremely funny guy who also knew his stuff about the city and its history. He was a great tour guide.

The first thing we learned was that the city hall standing today is the sixth version.  The first five burned down in various fires – apparently, it took five times for them to learn that wood burns.  The first great fire was in 1728 – it burned for 3 days and took out a fifth of the city.  The second great fire was in 1795.  I guess after 1795, they stopped calling them “great.”

Off to one side of the city hall, there is a statue of two lure horn blowers on top of a tall column.  The statue was donated by the Carlsberg (beer) Foundation on the 100th anniversary of founder J.C. Jacobsen’s birth.  The story goes, it a blond virgin walks past the statue, the lure horns will blow – no one’s heard it sound off yet.

It rained off and on during the entirety of the tour.  We walked very quickly from site to site trying to dodge raindrops.  When we could, we found dry places to stand while Jarod imparted various facts, such as Danes are big into Hygge – roughly translated into “cozy” or “coziness” ~ a warm fuzzy feeling; Danes are passionate about their flag; income taxes range from 44-65%; however, salaries are pretty high with an average salary of $4,500 per month (after taxes).  Danes need high salaries to be able to afford to live in Denmark – it is very expensive.  Other facts: Danes are usually pleasant, except when they get on bicycles, then they aren’t – do not walk in a bike lane, they don’t call them the kill zone for nothing.  Most Danes can’t afford to buy a car, well at least not a new one – there is a 150% sales tax on new cars.  Yikes.

Everywhere we went it was obvious that Pride Week was important.  In fact, Denmark was the first country to recognize same-sex unions.  The city was decked out in rainbow colors.

We eventually made our way to the New Harbor – the most photographed area of Copenhagen, besides The Little Mermaid.  The new harbor is pretty much the only area of Copenhagen that didn’t burn down in the 1700s.  We stopped for a restroom break and to give people a chance to take photos.

I also took the stop as an opportunity to purchase a Danish – you can’t come to Denmark and not have a Danish pastry (actually, in Denmark, they call Danish pastries Vienna bread).  I got a Maple Danish in honor of my Canadian roots.

Our last stop was at the backside of the palace.  Jarod told us that we would get to see parts of the changing of the guards up close and personal.  He didn’t let us down, the new guards walked up the street behind us, passing within feet of us as they entered the main square.  We lost sight of them for a bit, but just when we were going to complain about missing most of the ceremony, the old guards exited the grounds right in front of us.  We may not have seen the actual change, but we got to see them coming and going.

At the end of the tour, I joined forces with another solo traveler from Canada to do a little touring on our own before she headed to the rail station and I headed to my afternoon tour.  On both of our bucket lists was seeing The Little Mermaid, so we set our navigation apps and headed off, dodging all the foot traffic and participants of the Ironman triathlon that was taking place all over the city.

We had to double-back a few times to avoid the race route, but we finally made it to the water’s edge … and there she was … surrounded on land by people taking selfies … and boats in the water with people taking selfies of the backside of the Little Mermaid.  It was an absolute zoo.  I was a little underwhelmed by the statue – I thought she would be bigger – but it was also probably due to all the pushing and shoving taking place to get the “perfect” picture.  Mine are far from perfect.

My new buddy and I decided to check out the Marble Church that is apparently made of limestone.  It is a domed church and is just off the main Palace Square.  It was quite lovely, serene, and had a magnificent organ that was being played when we walked in.  There’s just something about organ music in a church with great acoustics that makes me so happy.

Unfortunately, my new friend and I had to part ways.  She was headed back to Stockholm for a work assignment and I was headed in the opposite direction from the rail station.  It’s nice to make new friends while traveling solo.

Since I had a bit of time before my next tour, I decided to check out one of the dessert shops Jarod had told us about – Bertels Salon.  They specialize in cheesecake – rich, velvety smooth, yummy cheesecake.  It wasn’t the healthiest of lunches, but since I knew I was doing a lot of walking today, I figured I would burn off some of the calories.  They were out of all of the cheesecakes featuring caramel (my favorite), so I went with Oreo – it was so good.  I’d love to say that it was too much for me to finish, but I can’t.

Christian IV founded Christianshavn in the 1700s as part of the fortification for Copenhagen (usually to defend against attack by the Swedes).  He invited merchants to build their homes in the area, many of who were influenced by Dutch architecture.  There are even canals reminiscent of the canals of Amsterdam.  Even the churches have interesting architecture.

Off to one side is the free city of Christiania.  Established in an area of abandoned military barracks back in the 1970s, Christiania is a controversial area because of its “hippie” commune-like status and its tolerance for the sale of “soft drugs” such as marijuana and hashish.  They have a zero-tolerance for hard drugs.  Christiania is a city within a city – it has restaurants, schools, businesses, etc.  In fact, most of the bicycles with the big boxes on the front that are seen all over town come from a company in Christiania.

At the end of the tour, I ventured inside Christiania.  Photos aren’t allowed on Pusher’s Street (where the soft drugs are sold), but I was able to take pictures of some of the phenomenal street art.  At no time was I uncomfortable walking around by myself.  It was obvious that there were drugs for sale, but no one was pushy or harassing.  An outdoor concert was being set up and I would have stayed to listen had the weather not been so horrid.  I would have even considered staying for dinner, as there were several highly recommended vegetarian food vendors, but again, the weather wasn’t cooperating.

On my way to the rail station to catch my train back to the hotel, I got a bit lost and ended up walking further than I intended … in the rain.  All in all, I walked in excess of 12 miles – does that make up for the cheesecake?  I can tell you, I was very happy to make it back to the hotel and put my weary feet up.  Maybe not so much walking tomorrow. 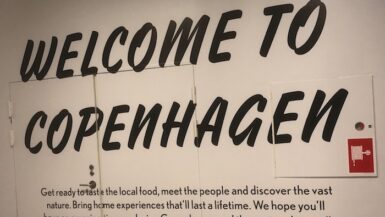 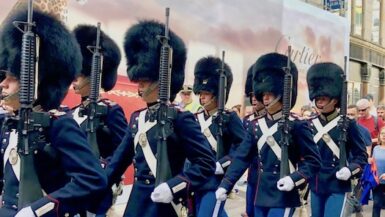