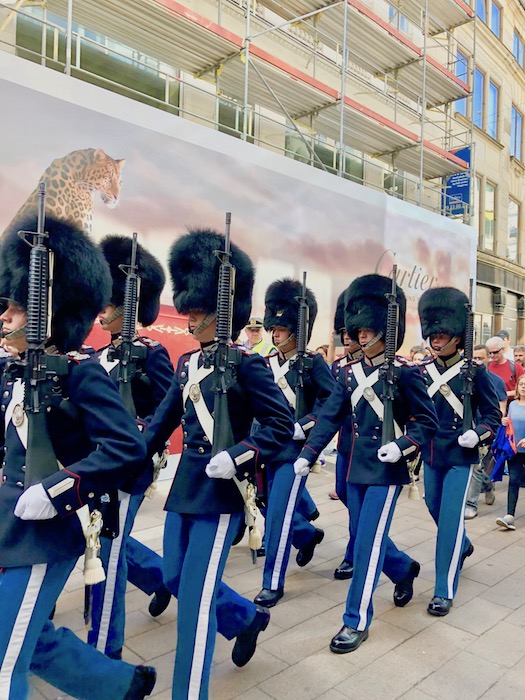 This morning I was able to solve the question of how many men it takes to print out a confirmation – the answer is three.  As I ate my breakfast in the lounge, three men left their wives talking cruises to print out confirmations for whatever tour they had planned for the day.  I was able to eat my entire breakfast, with a juice refill, while watching two of the men coach the third on what he needed to do because, apparently, he wasn’t doing it correctly.  It was a true comedy act.  The wives only checked on them once – I’m sure this wasn’t the first time they had seen this happen.  By the time I left the lounge, they still hadn’t printed off all the pages they needed.  I hope they made their tour.

I headed off in the direction of the metro to meet up with my tour.  At the ticket machine, I met a family I’d seen earlier in the lounge; they were trying, unsuccessfully, to buy tickets for the metro.  They let me go ahead of them and then I assisted them with purchasing theirs.  Since I seemed to know my way around the metro, they asked me for help in determining which stop to get out to go to the shops near Tivoli.  The only problem was, that to get to Tivoli, they should be taking the train, not the metro.  Since they’d already bought the metro tickets, I told them to stick with me and I’d get them pointed in the right direction.  They were quite impressed with my mastery of public transportation in the short time I’d been in Copenhagen – frankly, I was as well.

Once topside from the metro line, I pulled out my map (which was better than the one they had), showed them the correct route to get to the shopping street (they wanted high end), pointed out Magasin du Nord, also high-end shopping, and sent them on their way.

Coincidentally, I ended up walking along a portion of the high-end shopping street to get to my tour meeting point.  I hadn’t gone too far when I heard marching band music.  Down the lane came the Royal Marching Band.  I stood off to the side as first the band passed by and then a company of Royal Guards pulling up the rear.  Not sure why they were out and about the streets of Copenhagen, but it was cool to see.

Today’s free walking tour was called “Classical Copenhagen,” and the guide was Magnus.  As with all the other guides for the free walking tours, he had a lot of information and was passionate about what he told us.  The first story that he told us was about King Christian IV, whose father died when he was eleven years old.  He was too young to ascend to the throne, so a regent council oversaw the country’s dealings while Christian completed his studies and had eight years of “king training.”  When he turned 19, he officially became King.  He was a bit of a party animal, so he threw a massive inauguration party – it lasted for 3 days.  On the first day, he attended the party dressed as a king would; the second day, he came dressed as the Pope; and the third day, Christian came dressed like his wife.  People say he was the first drag queen.  He would have loved Pride Week.  Anyway, Christian also loved to fight wars and loved women – he ended up with 29 children, some of whom were legitimate.  Christian IV ruled for 59 years – a pretty long time for way back then.  Unfortunately, when he died, Denmark was bankrupt – he spent a lot of money fighting wars (many of them against Sweden).

Magnus took us to the street where the Great Synagogue is located.  It has been the site of some terrorist threats, so the street is heavily monitored and has a security and military presence 24/7.  If you want to visit the synagogue, you are intensively questioned and screened.  I decided that I’d make the effort on my next trip since I don’t have much time in the city on this trip.

Not too far from the Synagogue, is the Round Tower that was built in the 17th century by Christian IV.  Not only was it a tower but it is also the oldest functioning observatory in Europe.  The tower is also notable because it doesn’t have a staircase leading to the top; it has a slope that spirals around the core.  It must have made it easier for the King to be carried to the top.  It also makes it handy for a once per year unicycle race that Copenhagen has to the top and down again.

As we made our way around the sites, we came across the Royal Marching Band again – it was almost as if it was following me.  We caught the tail end of their parade, which ended up at Rosenborg Castle.  Magnus said that their presence in the streets meant that either the Queen or her son, the heir to the throne, was in town – he figured it must be Crown Prince Frederik.

Our tour ended just outside of Torvehallerne, a pair of food halls (one sweet, one savory) and an outdoor produce market.

He gave us the names of his favorites and set us free.  Of all the things I could choose for lunch, I chose … street tacos from Hija de Sanchez.

Yes, I ate tacos in Denmark.  Why you ask?  Well, the owner and chef, Rosio Sanchez, used to be a pastry chef at Noma, the most famous restaurant in Copenhagen and the breeding ground for some of the most innovative chefs in the world.  I figured if someone were going to do tacos well in Denmark, it would be her.  I must say these were some of the best street tacos I’ve had in my life.  Even the green sauce I added to give a little more kick was phenomenal.  You can even watch the corn tortillas being made by hand.  I was so excited to get the plate of tacos that I forgot to take a picture of it.  Afterward, I stood next to where the food was coming out waiting for someone to order the same plate as I had so that I could take a photo.  Yes, I was a taco stalker.

I spent the afternoon walking around the old town of Copenhagen.  In the Lutheran Church of Our Lady, I found the interior architecture very cool and soothing, or it may have been the impromptu organ and vocalist concert as they readied for a future performance.

The spiral walk up to the top of the Round Tower was dizzying, but the views from the top were amazing.

I was wowed by the interior of the Trinity Church next to the tower, particularly the pipe organ.

I made the obligatory stop at the Lego Store.  I mean, what is more Danish than Legos, right?

I even found my way back to the square in front of City Hall, only to find that all the trash from the Pride events had been removed and the square was once again tidy, just as you would think it would be in Denmark.

My plan was to spend the early evening at Tivoli before making my way back to my hotel.  The gardens were lovely, kids and adults were excited by the rides, and fun was in the air.

Just as I was thinking about stopping for dinner at one of the food vendors, the skies opened up and it started pouring rain.  Everyone, including me, was immediately drenched – it was one of those rains.  Several of us huddled in a doorway, but it didn’t look like it was going to stop anytime soon.

I decided to cut my losses and ran to the exit through the raindrops.  The closest exit actually ended up being the one through the Tivoli Food Hall, so I ended up having a dinner of two of the open face sandwiches for which the Danes are famous.  Just as I was finishing up, the rain stopped.

I guess I could have gone back into the amusement park, but I didn’t.  I found the right platform and the proper track catch a train back to the hotel.  My day was pretty much done.

Tomorrow I leave for Stockholm.  I definitely didn’t give myself enough time in Copenhagen.