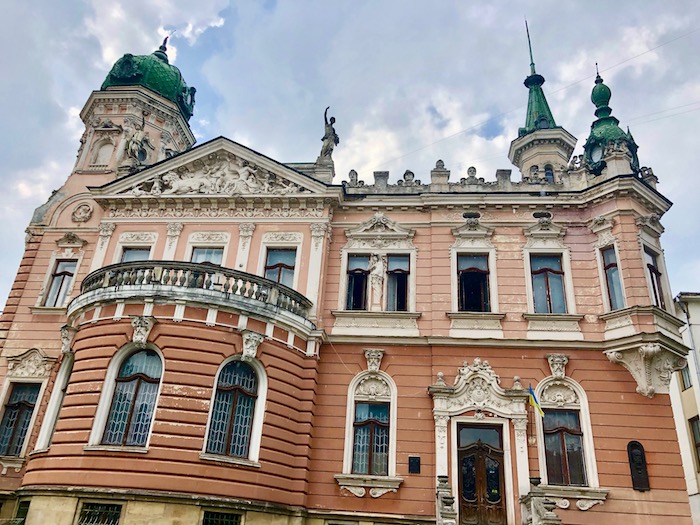 After spending the morning doing some computer things and checking on transportation for the next part of my trip, I took myself out to lunch at a nice restaurant on Market Square.  On Anna’s recommendation, I went to check out the brunch buffet at Kanapa (means sofa in English); however, by the time I arrived, the selections were looking a little sparse.  The menu looked interesting through and I was offered a great seat on the patio looking out at the square, so I decided to stay.

If the brunch is as good as the food I had, then I will come back next time I’m in Lviv.  To start, I had green borsch (which isn’t actually borsch) with nettle, pheasant, and guinea fowl with a dollop of farmer sour cream.  It was the best chicken noodle soup without the noodles that I’ve ever had.  While it was a bit too salty for my taste, the flavors of the greens and fowl mixed so well that I defy anyone with a cold that eats it not to get better.

For my main course, instead of the varenyky I was tempted to get, I chose galushky with stewed beef cheeks.  Galushky is a traditional dumpling that is a bit different – it isn’t stuffed.  It’s basically pieces of dough that are boiled.  The galushky in my dish were folded over, which made them great vessels for the delicious beef cream sauce and tender pieces of beef cheeks.  Due to the bowl’s shape and my lack of a spoon, I wasn’t able to get the last little bit of sauce.  I wanted to lick the bowl clean, but I thought people would stare.  I would definitely return to Lviv just for that dish.

Since I hadn’t eaten since lunch yesterday, I thought dessert was in order.  Anna had told me that I had to try Syrnyky – cheese pancakes, a Ukrainian dessert.  I figured the description of “cottage cheese pancakes” on the dessert menu fit the bill.  I had envisioned flat pancakes, but these came out looking almost like upside-down mini-muffins.  However, when paired with the sour cream and the berry jam/compote, these were little bites of yumminess.  By the end of the meal, I was stuffed.  I will not eat again for another 24 hours.

During my meal, I engaged in my favorite pastime – people-watching.  A little craft market had been set up in the square, so I watched as people perused the wares.

As I was starting my soup course, the bandstand set up at the far end of the square came alive.  At first, I thought it was some type of political rally as there were several people who gave short speeches.  But then, Ukrainian folk dancers took the stage.  I stopped one of the wait staff and she informed me it was some type of cultural celebration – she wasn’t sure for what.  After several songs of whirling around the stage, the dancers were replaced with an orchestra of men in Arabic dress.  I listened to a few of their songs while I finished my meal and then went for a walk before my tour.

Walking in old town Lviv is a really nice way to pass time.  There are statues and fountains to look at, people to watch, and trams to avoid getting hit by.

My tour was once again through Lviv Buddy.  Our group lucked out by getting Uliana as our guide (she was my food tour guide).  She gave a brief history of who controlled Ukraine until its independence in the 1990s, then we set off to find “Lviv’s Hidden Secrets.”

Our first stop was in an out of the way courtyard.

Yes, that is a bronze bust of a man’s belly – a beer belly to be exact.  No one knows whose belly was the model for the sculpture, or even why it is there.  Coincidentally, it is across the courtyard from a craft beer joint.

It’s also down the alley from the oldest building in the old town.  Much of the old town burned to the ground long ago – the black building is the only remaining wood structure.

As we left the old town behind us, we stopped at a statue of Volodymyr Ivasyuk, a Ukrainian songwriter, composer, and poet from the 1960s/1970s.  His most famous song was “Chervona Ruta” which we were told has to do searching for a flower that blooms only once a year that means you will find true love.  However, the irony is that the flower doesn’t exist.  Volodymyr was very popular in Ukraine and in the Soviet Union, possibly a bit too popular.  He died tragically at the age of 30.  He was found hanging from a tree in a forest.  Although the Russians ruled his death as suicide, forensic evidence indicates he had defensive wounds and he couldn’t have hung himself without help.  Was he too popular?  We’ll never know.

While walking through a park in the middle of a busy road, Uliana asked us whether we knew where the river Lviv was built on was located.  None of us knew.  That’s because it was located 3 meters below us.  Originally, the Poltva River was a moat that protected Lviv from invasions to the north.  In the middle of the 18th century, under pressure to develop housing and due to the threat of malaria from bugs associated with the river, the authorities decided to hide the river in tunnels.  It has been a part of Lviv’s sewage system since that time and even runs underneath the Opera House.  In WWII, Jews hiding out after escaping from the Nazis used the Poltva tunnels.

Two of the brainiacs who met there were Stanislaw Mazur, a Polish mathematician, and his mentor Stefan Banach.  The two of them maintained a “problems” book and a “solutions” book at the Café – they had to because they’d ruined a few marble tables by scratching their solutions into their tops.  Each problem had a prize associated with it – a few dollars, a beer, a meal, etc.  One problem remained unsolved from 1936 to 1973 when a young scientist solved it.  His prize?  A live goose.

Mazur also volunteered for a program under Rudolf Stefan Jan Weiger, a polish biologist.  Weiger needed human volunteers to allow lice to feed off their blood.  Once fed, the lice were ground into a paste, which became the first effective vaccine for typhus.  Weiger employed Polish intellectuals, Jews and people from the Polish underground, thereby ensuring their safety against the regime at the time.  The Weiger Institute was established at what is now a part of the University.

Four citadels were built in Lviv on the outskirts of the old town.  One now houses a five-star hotel, one is used as book storage, one has fallen to ruin, and the remaining one has been renovated but stands empty.  What is now the Citadel Hotel was the site for Stalag 328, a concentration camp.  284,000 people went through Stalag 328 and its sister camp, Stalag 325.  Just less than 150,000 people died of sickness, hunger, or were executed.

From the viewing deck at the side of the hotel, we had a good look over to High Castle Hill. While it is a hill, there is no castle. There was a castle, but there isn’t anymore – just the name remains.

Between the hotel and another of the citadels, we came across a secluded park in which a roughly hewn cross stands as a memorial to the holocaust (there are several Holocaust memorials in Lviv).  It was a place of solitude.

We walked back into the woods (braving mosquitoes and poison oak) to see the second citadel, which is used as book storage.  Roughly two million books confiscated by the Russians are sitting in this old building waiting for someone to do something with them.  Many of the books were taken out of churches, cathedrals, and monasteries.  Recently, while doing some type of inventory, it was discovered that some of the books are from the 17th and 18th-century and are worth a lot of money.  Oh, and underneath this citadel is a bomb storage area, which may, or may not, still contain unexploded bombs.  Yikes!

On our way for a short coffee break – Ukrainians love their coffee – we passed the Loncky Street Prison, a former detention center used for political prisoners during the Polish, Soviet, and Nazi regimes.  During the Nazi invasion of the Soviet Union in 1941, approximately 1,000 people were shot merely for being political prisoners.  A portion of the building is now a museum about the prison system in Ukraine.

Across the street, stands a monument to the Victims of Soviet Crimes.  It is an angular behemoth of a statue made from bronze obtained when one of Lviv’s Lenin statues was destroyed and melted down.

Although it was late in the tour, the group gathered at a little bar for beverages and a chat.  One of the women was very interested in how it is that I have so much time to travel.  When I explained my circumstances, she said something like “when I’m your age, I’ll be old and won’t have any money to travel.”  Hmmm, really tried not to be offended.  I was more than ready when Uliana said it was time to leave.

Down the block, we found some street art; we even found art in a tree.

In the courtyard of the Geography college of the National University of Lviv, stands a monument dedicated to … the backpack – the international symbol of travelers.  It is supposed to symbolize union and friendship between generations and the nations of the world.  The backpack sculpture is attached to a large rock, but the rock itself is free-standing.  Anyone who can pick up the backpack and rock combination is welcome to carry it away.  I don’t think that will happen any time soon.

On the wall next to the sculpture are boards with the history of the backpack.  Someone really has too much time on his or her hands if that was a research project.

On our way back toward the old town, we passed a monument to Ukrainian national poet, Taras Shevchenko. The backdrop to the left of the poet is supposed to represent Ukraine’s revival.

Our last stop of the tour was back in the old town at the Soldier’s Church.  We’d come full circle.  I really enjoyed the tour and wouldn’t have seen any of the stops on our route on my own.  That’s the best part of tours, particularly free tours – they get you off the beaten path.