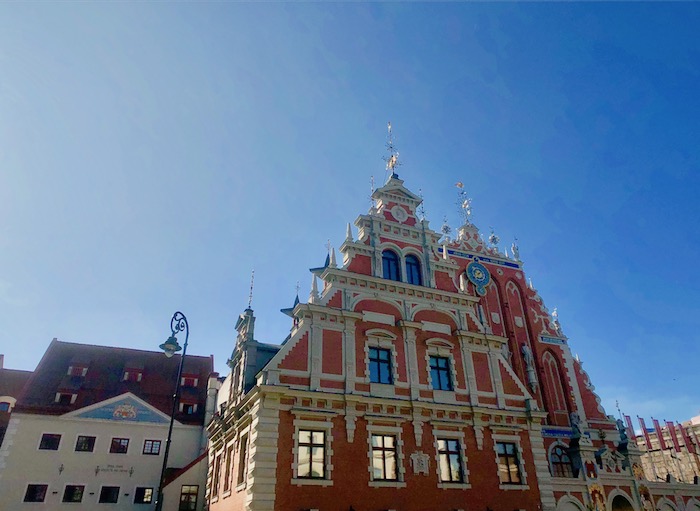 Just across from my apartment, there is a lovely little park that runs on either side of the canal. It is a peaceful place to walk and the bridge across the canal gives me quick access into the streets leading to the old town.

As I walked toward the meeting point for this morning’s free tour with Riga Free Tours, the architecture I encountered hinted to me that I was going to love this city. The overuse of cobblestones, however, I could have done without. Sturdy walking shoes are a must when touring the Baltics.

I met this morning’s tour guide, Agnes, at the entrance to St. Peter’s Basilica. She was full of information and a very nice person. The group was large, but she handled keeping us together and answering questions.

St. Peter’s isn’t open on Mondays, so we gathered outside. We learned that much of the church, including the spire, was destroyed in WWII. The church is a favorite of the people, so they raised the money to rebuild. Prior to WWII, the spire burned twice. In the first fire, the rooster weather vein that had been on the top fell and killed 8 people. A new rooster sits high atop the tower.

The Peitav Synagogue, built in an art nouveau style in 1905, was the only synagogue to survive WWII. While the Nazis burned all the other synagogues in Riga, this one survived because of its location in the old town and its proximity to so many other buildings. Instead of burning it, the Nazis used it as a warehouse. Today, it is the center of the Jewish community in Latvia. I didn’t have time to go inside, but from what I could see from the doorway, the interior is beautiful.

The most important square in Riga is the Town Hall Square. Not only is it the location of the Town Hall, but it is historically where the market was located and where all the executions took place. It’s also the location of the famous House of Blackheads (not a great name). It was here that the guild/union for unmarried merchants gathered and had wild parties, after all, they were bachelors with lots of money. Both the town hall and the House of Blackheads were bombed to ruin in WWII, but rebuilt decades later to their former glory.

Whether it be Art Nouveau, Baroque, Classical, or any other style, walking through the old town have me architectural goosebumps. I kept falling behind the tour group as I stopped to look at the buildings. I bumped into several people (and a few walls) because I was always looking up.

We wound in and around the narrow streets until we came upon the Three Brothers, a set of three pastel-colored houses. Together, they make up the oldest residences in Riga. The white house on the right was built in the 15th-century. It is set back from the street to allow for a space to park a horse. The pale yellow house in the middle is dated 1646, while the mint green house on the left was built some time in the late 17th-century. The collective name for the three dwellings stems from the story that the houses were built by men from different generations within the same family. While it is a nice story, there isn’t anything to back it up. If you visit, there are usually a couple of street musicians sitting on the “porch” of the white house that are quite skilled in playing songs from tourists’ home countries. Try and stump them.

Riga was once a fortified city, which means it was surrounded by a wall. The Swedish gate, which was built as part of the wall in 1698, used to be the entrance for the guards. Only a few portions of the wall still exist. Since it wasn’t very good at keeping attackers out, much of the wall was taken down during Swedish rule over the city and the materials reused to build new houses.

This portion of the remaining wall stops abruptly where a new building stands in its way.

In the shadows of the old wall stands this creepy sculpture. I’m not sure what it represents, but I definitely wouldn’t want to come around the corner in the dark and bump into it.

We ended the tour where we started, at St. Peter’s Basilica. But, while we started at the entrance, we ended at the rear of the church where another interesting sculpture is located. A rooster stands on the back of a cat who stands on the back of a dog who stands on the back of a donkey – they are the Town Musicians of Bremen. While the Brothers Grimm story has nothing to do with Riga, Bremen is its sister city. There is a similar statue in Bremen. This one, however, has something akin to a yoke around the animals – it is supposed to represent the iron curtain. Not sure any of the people taking pictures of it got the symbolic meaning, they just used it as a selfie backdrop and rubbed the animals’ noses for good luck.

Shortly after my morning tour, I joined Liga (rhymes with Riga) of Riga Free Tours for the “alternative” tour. Liga is a relatively new guide, but she is chock full of knowledge and very energetic.

A large portion of our tour was spent at our first stop – the Central Market. It’s where everyone shops, whether it be for clothes, shoes, trinkets, produce, cheese, meat, or even a snack.

While there are many vendors outside in the open-air marketplace, the main focus is the five large zeppelin hangers that were modified after the war to form the market. Although still enormous, the hangers were cut down to make for more manageable heating and cooling of the spaces.

The first hanger is for meat – you can find anything from pig heads to sausages to venison to chickens and more. The second hanger is for dairy products, however, this space was undergoing renovations. The third hanger houses a food hall and vendors of tea, herbs and various other items. The fourth hanger is where you’ll find vegetables and fruit. This hanger was pretty empty as all of the vendors were outside in the open-air market. I bet they’ll move inside when the weather gets a bit colder. The fifth and final hanger is where the fishmongers hang out. Latvians are particularly proud of their smoked fish. In fact, Latvians like to smoke a lot of food items, well, those that they don’t pickle. Liga also told us that Latvia is known for its beer and cider, but definitely not for its wine.

The group sat in a shady park while Liga provided us some information about employment and the economics of living in Riga. Unemployment is 7.1%. For the first 3 months that a person is without work, he/she receives 50% of their former salary. For the next 3 months, its 40%, and so on. It’s not much to live on, so there is an incentive to find work. The average monthly salary after taxes in Riga is 763 euros ($840), while the minimum salary is 420 euros ($460). Retirement can’t be much fun as the average pensioner only receives 120 euros ($132) per month. Apartments in the old town and city center are easy to find, just not by the locals. A one-bedroom apartment costs 300-400 euros ($330-440) per month in the city center, which is too expensive for locals unless they have a multiple salary household.

The area where we were sitting was once a part of the ghetto. On July 4, 1941, the Nazis burned the Great Synagogue while people were still in the building. Nazis and some of the local police force barricaded the doors so they couldn’t get out. A memorial now stands where the foundation and walls of the Synagogue once stood.

During WWII, four percent of Riga’s population (70,000 people) was sent to live in the ghetto, most of them Jewish. Another 20-30,000 people (mostly Jewish) from other countries were also placed in the ghetto. All but 6,000 people perished at the hands of the Nazis. Those that survived were strong men that the Germans used for hard labor and anyone who had been successfully smuggled out of the ghetto. Off to the side of the outline of the Great Synagogue stands a memorial to the 270 people who tried to save the lives of those living in the ghetto.

After our sobering visit to the memorials, we walked back toward old town through underground tunnels and some of Riga’s green parks along the canals. Fun fact: you can see beavers in and along the canals. We were cautioned not to pet or hug them as the beavers bite. I’m sorry, isn’t that just plain common sense? Oh, it’s also illegal to swim in the canals. Anyway, we passed by the National Opera House on our way to our last tour stop.

The Freedom Monument, or Mother Latvia, honors those who died in the Latvian fight for independence (1918-1920). The monument is 138 feet tall from base to the tip of the top star. Although many people believe the three stars represent the three Baltic countries (Estonia, Latvia, and Lithuania), they actually represent the three different regions within Latvia. The monument survived WWII and the Soviet occupation. Ironically, if you follow the gaze of Mother Latvia across the square, it leads you directly to the McDonalds situated on the far corner – a bastion of capitalism.

Just before ending the tour, Liga directed our attention to a clock just down the street. It’s called the chocolate clock, not because its made of chocolate, but because the name of Latvia’s chocolatier is on the base. The clock is famous because it is where couples usually meet for their first date. Liga’s own parents met at the clock.

The end of the tour wasn’t too far from my apartment, so I walked back oogling the architecture. The pink building in the middle photo below is the German embassy.

Riga is such a walkable city that I’m not sure I’ll have an opportunity to take public transport. If I need them, both the metro and the streetcar lines pass close to the apartment.

I’m beginning to like Riga. I didn’t give myself many days here. Luckily, I’m returning in November for a conference, so whatever I don’t get to see now, I’ll put on the list for then. More tours on the agenda tomorrow.