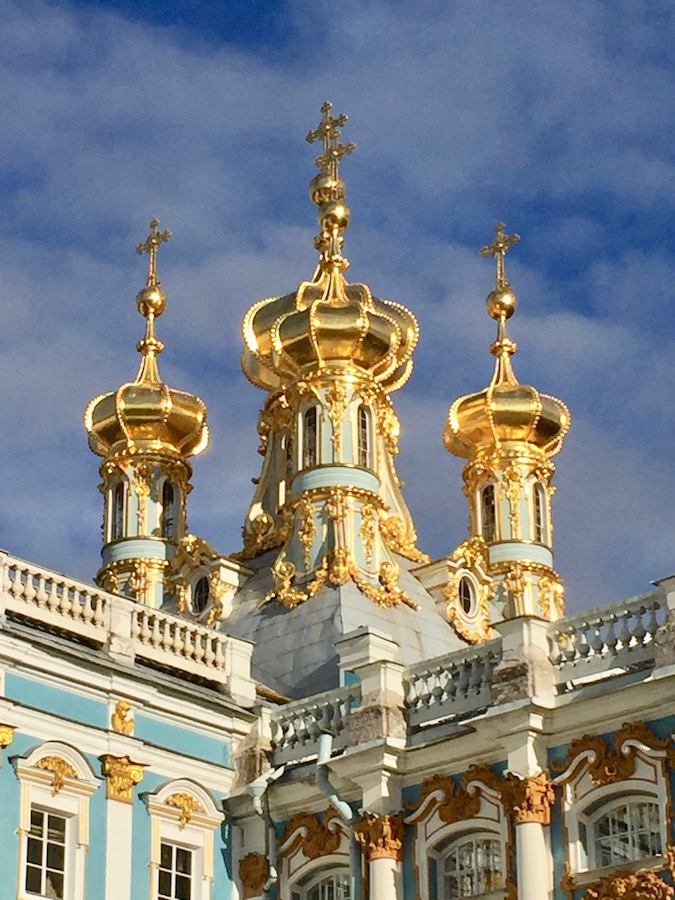 All was not right with my world when I awoke.  Curled in a ball, I wished and wished that my stomach issues would resolve themselves quickly.  I took every stomach medication I brought with me and added one that Rod brought with him, just to ease the discomfort.  We decided to forego our planned morning souvenir shopping expedition so that I could nap away my woes before our afternoon tour to Catherine’s Palace (aka Summer Palace).

Trying to be a trooper, by 1:00 p.m., I dressed and we left the hotel walking towards the Church on Spilled Blood (erected on the stones where Tsar Alexander II was assassinated).  The church’s multicolored onion domes are distinctive and beautiful.

As we waited, a bridal party (we’d seen several the day before) arrived at the church to take group pictures.  As with all the other bridal groups we’d seen the day before, the champagne was flowing (and probably lots of vodka).  The groom did not look too happy at all.  Apparently, Russia has an 80% + divorce rate, so I’m assuming he won’t be that unhappy for long.

Irina and her van driver Boris were along in a few minutes and we were off for an hour drive out to Pushkin to the Summer Palace.  Again Irina regaled us with the history of the Tsars and Tsarinas and the trip was almost uneventful – almost.  Just outside of Pushkin, I had to have the van stop at the side of the road.  Boris was not happy that he had to clean up the running board of the Mercedes van if you know what I mean.

We finally made it to Catherine’s Palace, which was actually initially built by Empress Elisabeth.  This was the beloved summer palace of Catherine the Great.

Catherine had many of the main building’s rooms redone because she detested the gaudy nature of the “all gold, all the time” style of Elisabeth.  She was a bit more classical; not to say, that Catherine’s interiors were not over the top.  The beautiful Amber Room has three walls of solid amber (basically petrified tree sap). The original amber panels were a gift to Peter the Great, but were pillaged during the war by the Germans and never seen again.  The Amber Room was completely refurbished (for a mere $18 million USD) under the direction of Putin, using mostly German funds (guilt money?).  Unfortunately, no pictures are allowed in the Amber Room.

Attached to the main palace, several other wings were built for family members, and at least one of Catherine’s lovers.  How scandalous!  Catherine loved bathhouses and had 3-4 built on the grounds, including a Turkish bath with a minaret-style tower.

Catherine Park is lovely with a man-made lake, islands, bridges, pavilions including the Grotto Pavilion done all in blue, and a concert hall on one of the islands in the lake.  The autumn colors of the park were serene. It was fun to watch children gather newly fallen leaves to make head wreaths (which is, apparently, a thing).

On our trip back to the city, Irina and I gossiped about American television and movie stars (she was most interested in whether Brad Pitt was dating anyone in the wake of his divorce).  Back at the hotel, Rod was left to his own devices for dinner (sushi in one of the hotel’s restaurants) as I wasn’t feeling up to going out.  Thus, the oldest restaurant in St. Petersburg, where we were supposed to dine, will go unreviewed until the next time I visit. 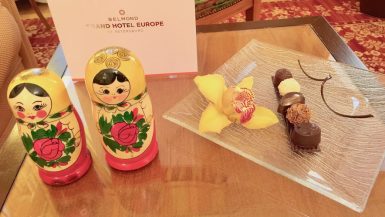 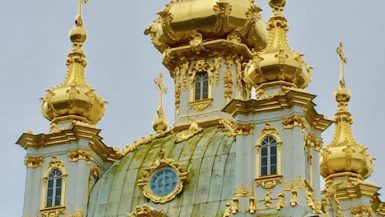 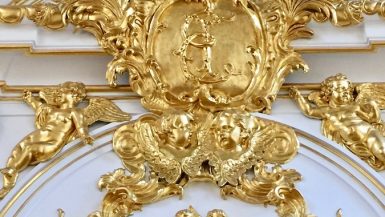