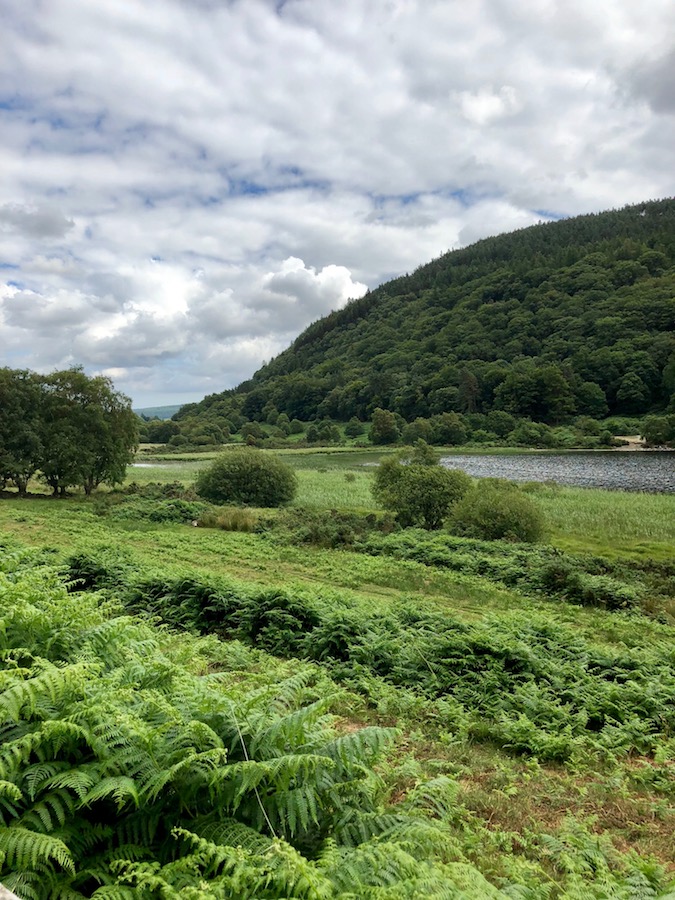 A Pilgrimage Of Sorts

Another Railtours Ireland adventure – this time merely to see the beautiful coastline, countryside and forests of the south of Ireland.  The ultimate destination was Glendalough ~ the valley of the two lakes and its monastic city.

My day started in Connolly Station, which happened to be about a 7 minute walk from my hotel.  I really lucked out with my hotel selection on this leg of my trip, particularly since I only selected it based on my available points (Hilton).  Connolly is a small enough rail station that I easily located the tour desk.  We were a small group of 5 – a young couple from Iowa who were much too googly-eyed at each other to engage with us older folks, a well-traveled couple from Connecticut (by way of Liverpool), and me.  Our guide, a retired engineer, was quite animated, a wealth of information regarding local history and pointed out obscure relics that I would have otherwise missed.

Our train took us along the coastline that was stunning despite the cloudiness of the day, and then inland towards the mountains of County Wicklow ~ the “Garden of Ireland.”

Upon arriving in the little town of Rathdrum, we transferred to our bus (a little to large for our small group) only to sit for about 20 minutes while we waited while funeral goers gathered outside the local Church.  They were in no particular hurry to start the walk to the cemetery and it appeared that the whole town was present, as it was a rather large gathering.  The procession moved slooooowly through town, with our bus bringing up the rear.

We traveled through the countryside, making a stop to look at an ancient cemetery where the Earl of the area built a tomb that was supposed to be the largest pyramid outside Egypt.  With room for 33, only 18 spots have been taken.

Onwards to the little town of Avoca, the backdrop for a famous BBC series called Ballykissangel and the home of the oldest working woolen mill in Ireland (begun in 1723) and Ireland’s oldest surviving business.  While this wasn’t the most optimal stop for me due to my allergy to wool, their store had a wide variety of nice Irish goods and a really good little cafe (I recommend the tomato basil soup highly).

It was then on to the highlight of our tour, the twin lakes of Glendalough, the site of a 12th century village, considered to be one of the most important monastic sites in Ireland.  Settled by St. Kevin in the 6th century, it thrived as one of Ireland’s great ecclesiastical centers until the Normans destroyed the monastery in 1214.    This is also the home of a sacred Christian pilgrimage that takes place in August ~ an 11 km walk from the far side of the mountain, up and over the mountain (deemed a moderate to difficult hike) and then down into the valley below to the monastic village and the famous Round Tower.  Standing 33 meters tall, it was built 1000 years ago as a bell tower, place of refuge and lookout (monasteries were not immune to attack). Pilgrims carry a stone with them, which holds their intention for their walk, and upon reaching the Tower, lay it at its base.

While I didn’t start on the far side of the mountain, I did walk the pilgrim trail (the part that has a nice, flat boardwalk) from the upper lake down to the lower lake and into the monastic site.  It was a lovely walk with stunning scenery.

The return bus trip provided more bucolic, pastoral scenes and even rocked me into a short nap.  I like this kind of stress-free travel.

Back in Dublin, I took the time to do some laundry (I like to travel lightly; thus, I take advantage of a laundry room when available).  I also decided to stay at the hotel for dinner, which was surprisingly good and very nicely presented (under all that twisty stuff is salmon).

Tomorrow, I’m off to Belfast for a few days. Cheers! 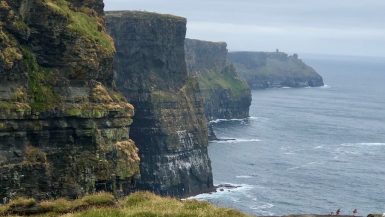