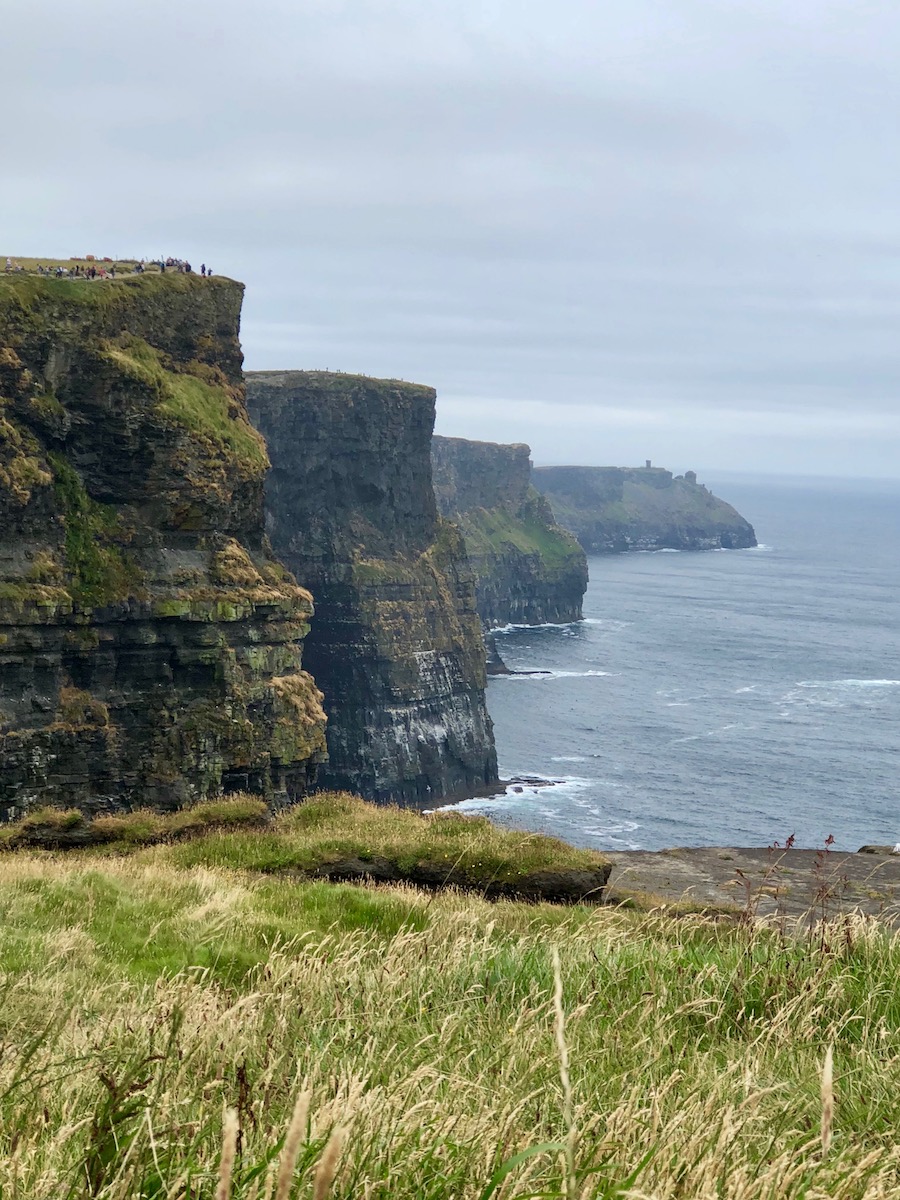 I love rail travel. I love the fact you can get a comfortable seat with a good view and, yet, have the flexibility of walking around if you don’t want to sit still. I love watching pastoral scenery whizzing by while daydreaming about what’s happening inside the houses, apartments, and businesses you can see out the window. I love watching cattle, sheep, and various other farm animals from inside the train without having an allergy attack. I even like the fact that, ultimately, I will succumb to the gait of the swaying train lulling me to sleep.

As much as I love train travel though, I also love a good guided tour. It follows then that a Railtours Ireland day tour out of Dublin involving a combination of train travel and a guided bus tour would be a perfect fit for me. I was not disappointed and recommend Railtours highly.

Today’s adventure took me on a train to the town of Limerick, multiple crossings of the River Shannon, a tour of Bunratty Castle, lunch in Doolan, a long hike along the Cliffs of Moher and a shorter one in The Burren, a rainy walk in Galway, and, finally, a train ride back to Dublin.   Besides a family of bus mates who were less than preferable (let’s just say that I endured extreme manspreading and an eviction from my awesome window seat to a less desirable location because I was about 20 seconds behind one of the aforementioned family members who wouldn’t move – all done with an unwarranted air of entitlement), the whole day was simply delightful.  I practiced my patience, found my zen and fully embraced all that was fabulous about the day. In the end, I took the high road and they took the low road – oops, sorry, that part of a Scottish ditty, not an Irish one.

One of the things I love about travel is meeting new people.  My train mates for the initial journey were from far and wide – Frank from Australia was an elderly gentleman traveling solo on a multiple night train trip after visiting his daughter in Dublin, Amy from Newfoundland was traveling with her mother and sister to visit places associated with their ancestry, Quay from Taiwan was traveling with nine fellow country persons with no discernible purpose other than to travel, and then there was a fun couple from Wisconsin and an adventurous couple from Vancouver who had already traveled to the far corners of the globe and back.

Although we were on the train together for a couple of hours, the time flew by as we were immersed in travel talk.  I sadly had to leave the group when my stop came all too early.  I was assisted with a quick transfer in Limerick Junction to a second train (it was on the other side of the platform about 15 feet away), and then handed off to our bus tour guide upon arrival in Limerick, a delightful small town that will need to be explored on another trip.

Our tour guide and the bus driver were jolly fellows with songs in their hearts… literally. In conjunction with continuous history lessons throughout the day, they broke out in song when they thought of one that related (sometimes loosely) to the knowledge presented.  Both men were also avid rugby fans. They told us of a legendary match between a local Irish team and the All Blacks in 1978 – the local team smashed the All Blacks 12-0.

They were also hurling fans (no, not curling – hurling).  During tour stops, they immediately turned the radio to an openly contested hurling match that was deciding a crucial spot in the finals.  Note to self – research rules of hurling.

Our first stop on the bus tour was Bunratty Castle in County Clare. The McNamara clan built the castle in 1425. It was later taken away by the O’Brien clan after one of many battles. Ultimately, it was left in ruins by the O’Briens in the 1880s. An English couple purchased and restored it to its former glory in the 1950s.

While it is much more compact than other castles I’ve visited, Bunratty has a certain charm and elegance of its own.  I’m not sure how soldiers defending the castle ran up and down the narrow, steep, winding staircases in full armor wielding swords. I had to grip the sides of the walls just so I didn’t plunge face first while creeping slowing down the steps (with no weapon other than my iPhone in hand).  The castle, of course, had the requisite hole over the entry in which boiling oil, water and other things (such as excrement) could be poured, and the trap door in the entryway that could open to swallow up enemies not deterred by the aforementioned oil, water, and bodily fluids.

Back on the road, we headed closer to the coast, making a quick stop at a legendary tree.  Apparently, when the highway was being built, the locals complained loudly that it was heading toward a magical Hawthorne bush reputed to be the home of a Faery community.  Their cries were heard so loudly that it halted the construction of the roadway for ten years and took 5 million euros to reroute it 20 feet to avoid destruction.  Unfortunately, we were not lucky enough to get a glimpse of any faeries or leprechauns. (Frankly, it just looked like a big bush at the side of the road to me – does that make me a non-believer?)

Although I’ll spare you the photographs, we also encountered several of a new breed of animal along the road – the MAMIL.  Due to a new fitness plan devised by the government to get Irish workers back in shape by granting money to buy bicycles for a “bike to work” program, the roads are now graced with a lot of Middle Aged Men In Lycra.  This new breed slowed traffic to a crawl more than once as they took over the road – my eyes truly can’t unsee the spectacle that is the MAMIL.

After devouring the lunch special at Gus O’Connor’s pub in Doolan (stuffed chicken and gravy), we headed off to the main attraction for the day – the Cliffs of Moher.  Although we arrived in a light rain and the fog had come in off the coast, while I hiked along the cliffs, the sky cleared and the fog dissipated, revealing the majesty of the craggy cliff-sides.  Words aren’t enough to describe the raw beauty.

I cannot say that I stood at the extreme edge of the cliffs to take my photos, but I did muster up the courage to join the throngs of others who stepped over the barriers to get a closer look.  I just kept about 5-7 feet between me and the edge because, simply put, I’m terrified of heights.  I had several minor panic attacks as I watched others stand precariously close to the edge just to get that perfect selfie.  Don’t they know there is no coming back from a minor misstep?

It was upon returning back from my glorious two-hour hike along the cliffs that I was evicted from my window seat in the bus.  I was too content after my walk to argue, but, from my new less picture-perfect seat, I definitely sent death glares in their direction.  Grrrr.

Our bus traveled further along the coast skirting The Burren, a fascinating rocky area where Mediterranean flora grows in the cracks and crevices of the rocks despite the Irish cold weather.

Our trip ended in Galway, one of Ireland’s party towns – home to many a stag and hen party.  Through moderately heavy rain, I walked the pedestrian-friendly streets of downtown Galway to get its flavor (for a future trip) before searching out some take-away food for the return rail trip to Dublin.

As I disembarked at journey’s end, the train’s faceless voice reminded me to “mind the gap” between the train’s steps and the platform.  For some reason, that phrase always makes me laugh.

Outside of the train station, I negotiated Dublin’s light rail (LUAS – pronounced Lewis) with the help of a stranger on his way home from work. At 10:30 pm, I finally made it back to my hotel in time to crawl into bed for a welcomed deep slumber. 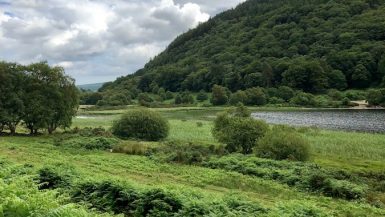 A Pilgrimage Of Sorts