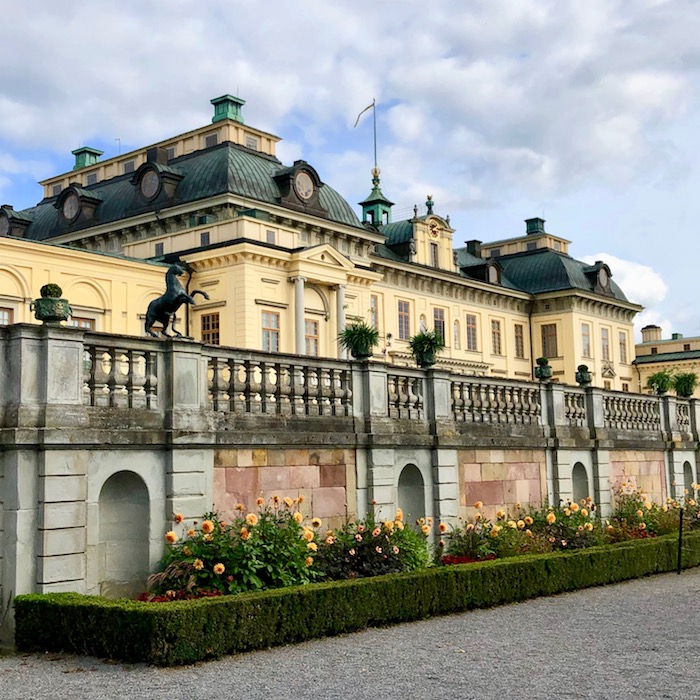 I hadn’t done as much planning for the second half of my trip as I had for the first half.  I knew some of the sights I wanted to see, but I hadn’t made reservations or purchased tickets.  Since I knew I wanted to go out to Drottningholm Palace, the actual home of the King and Queen, and I knew that it was a popular tourist attraction, I got up early and made my way via the metro to the Central Station.

From there, I walked down to the bank of the lake to the ferry station.

The boat I wanted to take is part of the Stromma fleet, so I headed to their ticket booth and purchased a one-way ticket to the Palace.  I was the first person in the queue to get on the boat, which was lucky because a group of about 60 high school students was about a minute behind me getting in line.

Being first in line allowed me to secure a prime photo spot upstairs on the open deck.  The view of the nearby City Hall was beautiful and unobstructed.

We soon left the dock and proceeded to chug up Lake Mälaren.  The views of the houses and apartments on the banks of the lake were spectacular.  It was obvious that there is a big boat culture in Sweden.

In the distance, we saw groups of school children swimming in the lake and/or having a picnic.  School is already fully in session, but the Swedes seem to do lots of school trips.

As the houses drew sparser on the shores, we dodged around several of the 221,831 islands within Sweden.

About one hour after leaving Stockholm, Drottningholm Palace slid into view.  The water approach is quite spectacular.  Drottningholm actually means “Queen’s Islet.”

The Palace was built in the 16th century and was used primarily as a summer palace until the current royal family decided to use it as their primary residence.  It’s very popular with tourists including lots of tour buses), but since I was there on a weekday and the weather forecast had been sketchy, the crowds were very manageable.

As I wandered up the pathway, I came across a mini changing of the guard.  There was no pomp and circumstance, but it was efficient and got the job done.  I seem to keep running into guard changing ceremonies.

I had time before taking a tour of the Royal Opera Theatre, so I took a walk through the grounds to the side of the palace.  It was very serene and green.  I wondered how many people it took to cut the grass.  Since it’s a palace, I eventually came across swans.

The theatre on the grounds is one of the few 18th-century theaters still in use in Europe that uses its original stage machinery.  Stage sets can be changed within 4-8 seconds using the original rope and pulley systems; sets descend from the ceiling, rise from the floor, and swing in from the side wings.  The tour gave a look at the back rooms, some of the props, and some of the costumes.  We sat for a short time in the back of the theatre, but photographs weren’t allowed as royal dramatic actors were rehearsing an original play about Beethoven.  It was an interesting tour.

On my way to the main palace, I passed the exterior of the palace’s church.  Unfortunately, I couldn’t gain entrance – not sure why.

Before entering the palace, I stopped for a bite to eat.  Since I’m in Sweden, I decided on the Swedish meatballs with gravy, lingonberries, pickled cucumbers, and mashed potatoes.  These were far better meatballs than what you get at Ikea (although those are decent).  The lingonberries were a sweet, yet tart party in my mouth and a perfect accompaniment to the meatballs and gravy.  My tummy was very happy that I had stopped for a late lunch.

The view from the top of the steps of the palace entrance was beautiful looking over the water.  I wouldn’t mind waking up to that view every morning.

I quite enjoyed walking through the rooms of the palace that are open to the public (with a paid ticket).  Of course, I loved all of the gold flake, plasterwork, statuary, artwork, and the ceilings – always look up, the best art is above you.  The palace is just the right amount of ostentatious, which falls in line with the Swedish concept of Lagom – “not too much, not too little, just enough.”

Despite my love for the ceilings and the gorgeous blue main bedroom, I think my favorite room was the library.  Originally a mirrored gallery, it was converted into a library in 1760.  The library holds close to 7500 books.  If any of the chairs looked comfortable, which they didn’t, I wouldn’t have minded curling up with a volume or two.

A peek out the window gave me a good look back out to the lake in front and the gardens in the back.  The gardens looked inviting, so I headed outside.

The gardens are very orderly, but not really fancy like, say, Versailles.  But, it was pleasant enough to walk on the pea gravel pathways out to the fountains and in the direction of one of the pavilions in the far corner.

At the end of my walk, I found the Chinese Pavilion.  Built between 1753 and 1769, it was a gift from King Adolf Frederick to Queen Lovisa Ulrika.  It was used for lounging and private dinners, but it is now a mini-museum.  It’s a little dark inside, but I enjoyed looking at the artifacts on display (entrance is with a paid ticket).

By the time I walked back to the palace, the last boat back to Stockholm had left the dock.  That’s okay, I had planned to return via public transportation anyway.  I caught a bus (using my access card) and we promptly got stuck in rush hour traffic.

I unintentionally got off at the wrong stop, but a little walk soon brought me to a metro station where I was able to catch T14 back to the stop by my apartment.  I’m really getting the hang of the Stockholm metro system.  Yay me! 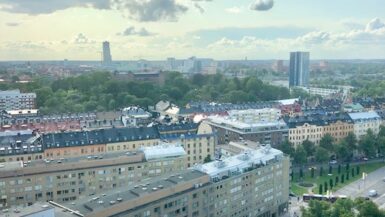 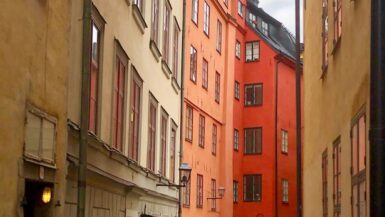 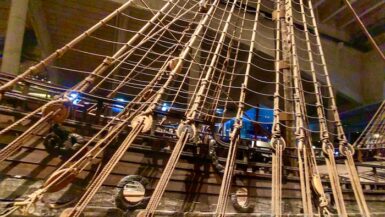