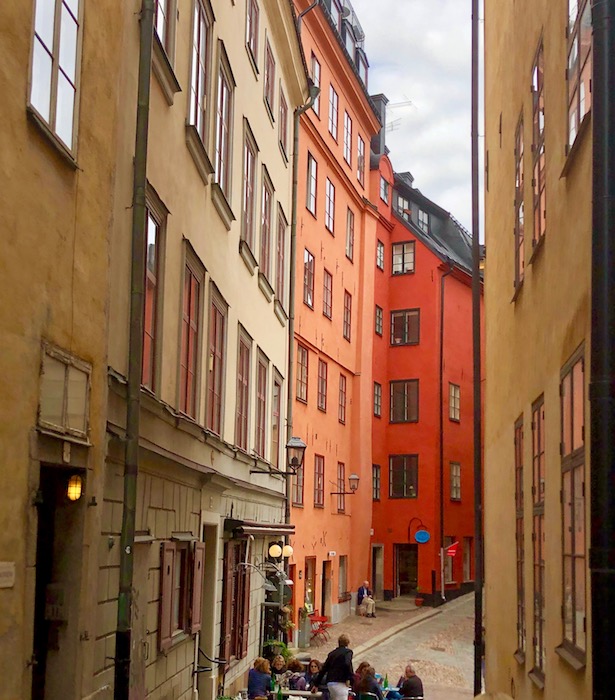 I was a little annoyed with myself that I had selected an apartment that was well north of the major Stockholm sights.  That was until I determined that there was a metro stop close by that was only 3-4 stops away from where I wanted to visit.  Taking public transportation is pretty common in Stockholm, so it’s a good idea to get an access card that can be pre-loaded with 1-3 days worth of travel and be topped off later if you need more travel.  The card is good for the metro, trams, and buses.  Individual tickets can also be purchased, but could add up quickly; individual tickets can also be purchased for trips farther afield.

With help from my navigation app, I found the closest entrance to the metro station (there are at least four separate entrances), purchased my access card, and determined the direction I was supposed to go.  The metro wasn’t too crowded, the cars were clean, and the trip to Gamla Stan, where I was headed to join another free walking tour, was pretty quick.

I was early, of course, so I chose to make an early Fika stop (coffee and a sweet) minus the coffee.  As you may recall from my trip to Finland last year, I love a good cinnamon bun. Since the Swedes profess to enjoy them for Fika, I decided to try one, purely for research (yeah, right).  It was pretty good, but it wasn’t as light, crispy, or enjoyable as any of the Korvapuusti I ate in Helsinki.

My first tour of the day was a City Tour, which would take us away from the old town.  Our first stop was at the House of Nobility/Knights (Riddarhuset), which maintains records and acts on behalf of Swedish nobility – I didn’t know that they needed someone to act on their behalf.  I guess it’s kind of like the British House of Lords (or not).  A French architect, who never saw it completed, designed the building itself in the 17th century.  He was killed by a Swedish … wait for it … nobleman.  His son took over the project and finished it for him.

We walked through some of the back streets looking at the architecture that was mainly influenced by the Germans, French, and Italians.  Swedish architecture really didn’t come into popularity until the 20th century.

Close to the palace, we came across the Parliament House (Riksdagshuset), which is the seat of the Riksdag, the Swedish parliament.  It consists of two buildings and combines neoclassical and baroque revival styles.  The building is heavily guarded, particularly when parliament is in session.  You can book tours of the parliament (in advance) when it is in session between September and June.  Hmm, isn’t that the same as the school year?  Does that mean that they act like school children when in session?

Next door is the Royal Palace, the official residences of King Carl Gustaf XVI; however, he and Queen Silvia don’t live there.  Actually, no one lives in the Royal Palace.  The royals live out at Drottningholm Palace on the far outskirts of Stockholm.  Apparently, they wanted to raise their family in “nature.”  That means that none of the 1430 rooms are put to use other than formal receptions.  Such a waste of taxpayer money.  Portions of the palace can be toured, but our guide said it was underwhelming and not where he would put his sightseeing time and effort.  The palace does come with several ghosts, the most notable being the White Lady who seems to be a precursor to death (i.e. she’s seen and someone dies shortly thereafter).

We caught a glimpse of the City Hall on the banks of Lake Mälaren.  It is a very popular sight and can be toured (I didn’t, but have it on the list for next time).  The City Hall is famous for being the site of the Nobel Prize banquet in its Blue Hall for 1300+ guests and the ball afterward in the Golden Hall.

A further stroll away brought us to the Royal Swedish Opera House, which is on the other side of the bridge from the palace and parliament building.  Commissioned by King Gustav III and opened in 1782, it would become the location ten years later of his assassination during a masquerade ball.  This event became the inspiration for Verdi’s opera Masquerade Ball.

Down the hill, we entered the King’s Garden, Stockholm’s smaller version of Central Park.  It is a gathering spot for friends meeting for a picnic or to a night out.  At one end of the gardens is a statue of King Charles XII, a king revered by his people; at the other end, is a statue of King Charles XIII, a king despised and mocked by his people.

On the outskirts of the King’s Garden, are the Raoul Wallenberg and Holocaust memorials.  Raoul Wallenberg was a Swedish diplomat who saved many Hungarian Jews from death by giving them diplomatic status and housing them in diplomatic buildings.  After Budapest collapsed, he was arrested by the Soviets and put to death.  The writing on the ground in front of the Holocaust memorial is his signature found on the paperwork used to save lives.

The last stop on our morning tour was the Royal Dramatic Theatre.  There’s lots of faux bling on the outside, but apparently, all the bling on the inside is real (i.e. lots and lots of gold).  Unfortunately, we didn’t have a chance to enter the building.  On the outside of the building, stands a statue of Swedish actress Margaretha Krook.  She never wanted a statue made of her because she said statues were cold and uninviting.  So, they came up with a statue that is heated from the inside (to body temperature).  Many a person has warmed their hands on a cold winter day or night.  The statue stands in her favorite smoking corner.

At the end of the tour, I befriended a very nice couple from Australia.  The three of us sat together on the Theatre steps because our guide told us the Royal Marching Band and Guards would be coming by on their way to the changing of the guards (12:15 pm, except on Sunday at 1:15 pm).  We heard the music before we saw them – the band and guards were actually all on horseback.  Very impressive and a bit of one-upmanship to the Danish Royal marching band.

After the horses went by, the three of us dashed up the street to Saluhall, a food hall, for a quick bite to eat before our afternoon free walking tour of Gamla Stan.  We had a combination of Lebanese and Greek food for lunch.

On our way back to Gamla Stan to meet the tour, we ran across the marching band and guards finishing up their parade tour.  I swear these marching bands are following me.

Our free walking tour guide for the afternoon was Alex.  He handled the extraordinarily large group very well while providing lots of information.  He first talked about all the fires that burned much of the Old Town at one time or another.  Houses were made of wood – wood burns.  We saw one of the only houses that didn’t burn on the western side of Stockholm – it was made of stone/brick.  In the 18th century, if you wanted the fire brigade to save you first, you paid a hefty amount for fire insurance.  It meant you were wealthy … and selfish.  If you paid up, a plaque was hung over your door indicating that you were more worthy of the fire brigade’s efforts.

Much of the area was settled by Germans; therefore, a lot of the architecture was German-influenced, including the Lutheran Church.  The church has glockenspiel bells, but unfortunately, we weren’t around when they rang.

The narrowest street in Gamla Stan is Marten Trotzigs Grand; it is a mere 35 inches wide.  Marten Trotzigs was a wealthy merchant from the 16th century.  He used the alley (which he owned) to go from his home to other property he owned in the city.  Now, it’s just crowded with people taking selfies.

It’s not like the streets in Gamla Stan are too wide anyway; the lanes are very narrow and can become a bit claustrophobic.

Our last stop on the afternoon tour was the square that holds some of the most photographed merchant homes in Stockholm.  Other than being Instagram worthy, the square holds significant historical meaning as it was the site of the Stockholm “bloodbath.”  After the coronation of Christian II (we heard about him in Copenhagen), he convened a large banquet in the green building on the left and invited the highest representatives of Swedish aristocracy, military, etc.  Christian II felt that these people had opposed his becoming King.  After wining and dining these people, the King’s soldiers sealed the doors and a “trial” took place deeming all of the invited guests as traitors.  In the days that followed, each person was taken into the square and executed until the cobblestones ran red with blood.  All in all, 82 people were executed.  It is said that there is a square white stone for every person who died on the face of the red building to the right of the site of the deadly banquet.

How’s that for an end to a grand city tour.