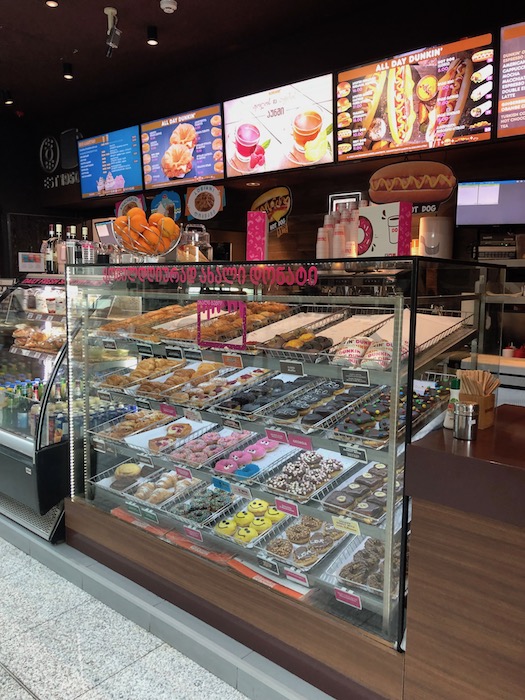 Dunkin’ My Way To Kyiv

When I found out that my flight time had been changed, I had to undo some of my itinerary.  When my flight was to land in the morning, I had pre-arranged a pickup from the airport and booked an afternoon walking tour of Kyiv.  All those reservations had to be changed or canceled.  It was a slight hiccup in my schedule, but it did mean I had one less day in Kyiv.

With my day free until taxi pickup at 4:30 p.m., what to do, what to do?  I could have rushed to all the sites in Tbilisi I hadn’t been able to pack in, but I didn’t.  I chose to take the alteration as a sign that I needed to chillax.  So, that’s what I did.  I slept in a bit, had a light breakfast, and then set to writing.  Editing photographs, writing and rewriting posts on a daily basis takes longer than I thought.  Already, I’m 2-3 days behind.  Trying to not let it get out of hand.

After a few hours, I needed a break, so I headed up to the rooftop terrace, where I hadn’t yet been to check out the view.  Besides the young man sunbathing on the roof, the views were fantastic.  I only wish I’d gone upstairs earlier in the trip.

Packed and ready to go, it was time to say goodbye to Envoy Hostel and its wonderful crew.  They were so kind and attentive, and my room was great (minus the fact I had to share a bathroom).  I would definitely recommend their hostel and/or their tours (you don’t have to be staying at the hostel to use their tour agency).

My driver was truly a man of few words.  Actually, I’m not sure he said one word or even uttered a grunt the entire drive to Tbilisi Airport.  He let me off at the curb and pointed in the general direction of departures then sped away.

The ticketing area is enormous with very few signs that make sense.  I didn’t see any signs for Georgian Airways, so I walked up to the first agent I saw who looked like they might speak English.  They pointed in the direction of the far side of the vast hall.  Just as I was walking around the corner, an announcement over the loudspeaker advised that Georgian Flight 757 was now ready for ticketing at counters 12-15.  As it happened, I was just walking up to lane 12 and was the first person in line.  Lucky me.

Prior to my trip, I read the carryon allowances for all the airlines I would be flying.  Georgian had the strictest at 8kg.  I also read that they could be fanatical about weighing and measuring baggage.  Since my backpack was a little over the allowance I worried – I do not like to check my bags.  When asked if I had bags to check, I just told the agent that I’d like to carry on.  He looked at my backpack and my small daypack, looked at me, looked at my bags a second time, and said “OK.”  That was easy.

Ticket in hand, I headed up the escalator to security.  Not one other person was in line.  I tried to duck under the rope so I wouldn’t have to go up and down the lines, but my backpack got stuck and almost took the entire partition down.  The agent seemed amused, helped me with my bags and cleared me through security in a blink of an eye.  The same happened at passport control – not one person in line and I was through in a snap.

With almost two hours to kill and no lounge to hang out in, I checked out my options – there weren’t many.  I was also hamstrung a bit by the fact I very few Georgian lari left in my pocket.  I was hungry and a wave of melancholy had washed over me for some unknown reason.  A bit of home would be good at this moment.  Just then, I spied the familiar pink and orange sign of Dunkin Donuts (I think they just call it Dunkin now).  I don’t frequent the chain back in the US, but it was the little bit of home that I needed.  Things were a bit pricey, but I eked out enough change for a lobiani and a bottle of water.  Looking at the case of donuts somehow calmed me.

Despite the crowd that swarmed the check-in desk, boarding the Georgian Airways plane was fast and efficient.  At two minutes to seven, the jetway pushed away from the plane and we were underway.

The plane had a two by two configuration.  I was on one side with the father of a family, while his wife and child (who whined continuously throughout the flight – thank you noise-canceling headphones) were on the other side.  As we began to taxi, he pulled a giant lollipop out of the bag under the seat in front of him and proceeded to unwrap it.  The lollipop was actually many lollipops in a packaged designed to look like one giant one.  We laughed at his attempts to get the wrapper off without dropping everything else.  Then he offered me my choice of flavors.  On takeoff, our entire row was sitting back and enjoying candy on a stick.

The first portion of the flight was bumpy, but the views down below were amazing.

The Georgian Airways crew was very matter-of-fact and efficient.  There weren’t many smiles spread around.  Beverage choices were water or coffee, but we did get a meal.  We were each handed a box containing cucumber/tomato slices, a roll, some type of pastry thing, and what I think was cake.  Additionally, we were each provided an extremely hot entrée of chicken and rice.  It won’t go down in history as the world’s greatest airline meal, but since I wasn’t expecting any meal at all, it was decent.  The perfect compliment to the cherry lollipop.

As we began our descent into Kyiv, the sunset above the clouds was spectacular, and the dimming light over the lakes was beautiful.

Lines at immigration were short and I was through in no time.  The agent didn’t seem interested in why I was coming into Ukraine.  He probably just wanted to get home.

I found the sign with my name on it and followed the driver out into the night.  There was no offer to take one of my backpacks; actually, there were no words at all.  I keep getting the strong silent types for drivers.

Ukrainian roads and Ukrainian drivers were such a blessing after Georgian traffic.  There were actually dividing lines on the roads, the roads were flat and smooth, and drivers actually obeyed rules.  Ukrainians do drive very fast though.  I held onto the armrest as we sped at Autobahn speeds on the highway and then into city streets.

Several one-way cobble-stoned streets later, I arrived at Dream Hostel.  My room is on the third floor, which means more stairs, but it is large, has a big desk, and, best of all, a private bathroom.  Time for bed!