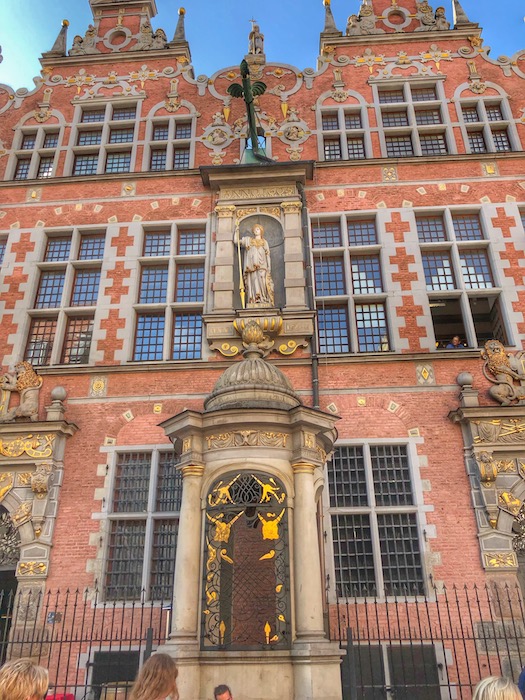 It was gloomy and hazy as I walked out of my Warsaw studio on my way to the rail station.   The clouds looked as if they would open up at any moment.

As usual, I arrived well in advance of my departure.  The station was, once again, empty because I was so early.  It filled gradually until there was a mass of people just as the train pulled toward the platform.  I felt a sense of déjà vu as I filed into the car and took my seat.

As the car attendant approached, I already had my order in mind – the mini sandwiches with chorizo, a cup of green tea (I am fighting a cold), an orange juice, and a bottle of water.  This time, I didn’t want him/her to quizzically ask me if that was all I wanted – so, I pretty much took one of everything (except soda).

As we left Warsaw behind us, the skies grew darker over the landscape until the skies opened up.  The closer we got to Gdansk, the clouds once again became puffy and the sun began to shine.  I took this as a good omen.

The Gdansk rail station was smaller than I had thought it would be for a major city.

Fancy on the outside, but pretty plain on the inside, the station is currently undergoing a major renovation.  No matter, it had what I needed since I had to wait a bit for my apartment to come available – a McDonald’s.  I could have opted for a seat at the KFC, but I knew that I would get free Wi-Fi (but no free restroom) at McDonald’s.  I set up camp in the far corner of the upper level – it was only for an hour or so.

My GPS indicated that it would be quicker to walk to my apartment than to take an Uber, so I strapped on my bags and followed its directions.

It soon became evident why walking was the better option.  The annual St. Dominic’s Fair, one of the biggest marketplace in Europe, had shut down most of the streets in the Old Town.  It was one big pedestrian mall.  My apartment turned out to be situated off one of the main thoroughfares of the marketplace.  It’s all about location, location, location.

Although the temperature was cooler, I was a sweaty mess by the time I reached the apartment and found the key.  I opened the door to a spacious, well-decorated apartment with a comfortable king-sized bed and a bathroom with a large tub/shower combo.

Happy, happy … until I noticed that there wasn’t a way to turn on the air conditioner.  Actually, I couldn’t find an air conditioner – was it central air?  I rechecked my booking confirmation and noted that the description said there was air conditioning.  I sent off an email and text to the owner.  No response.  When I called, I was told that the apartment didn’t have air con and, no, I was wrong, their listing didn’t say that it had an air conditioner.  I read the description from my confirmation to her – silence – she would have to talk to the owner, as she was just the receptionist, and get back to me.

Having no confidence that she would, in fact, get right back to me, I called the help desk of Booking.com … and the negotiations began.  I was told that Booking.com doesn’t control what the owners write for their listings – they have to trust them to be correct, but that he would call the property and see what he could do.  To make a long story short, because it did take an hour or so, I got a discount on the rental from the owner, a small reimbursement for my trouble from Booking.com, and the promise of a fan for the bedroom so it would be cool for sleeping.  In a city full of people for the festivities, it was a decent compromise since the outside temperatures were not unbearable.  [Note:  I did, in fact, sleep comfortably under the gentle breeze of the fan.]

I put the issue behind me and set off to make my way to the Golden Gate to meet the guide for Walkative’s tour of historic Gdansk.  I’m really digging these free walking tours.  The guide for the afternoon was Martin.  He knew his stuff and helped guide us through the crazy mass of people to some of Gdansk’s greatest sites.  I thoroughly enjoyed his tour.  First off, he told us that 6 million people attend St. Dominic’s fair every year – no wonder the streets were so busy.  It must be popular as this is the 759th year of the fair.  Lots of vendors, lots of food, and lots of entertainment; the fair lasts for a few weeks.

Gdansk is over 1,000 years old and, as a port city, has been an important asset to several dynasties.  It was even its own sovereign city/state for a period of time including right up to WWII.  Unfortunately, up to 95% of Gdansk was damaged in and after the war.  The Red Army burned what wasn’t damaged in the war.  The city has been resurrected from the ashes and has been rebuilt, not as a new city, but as a replica of the old city with its Polish heart and soul.

The architecture of the city is fascinating, with many styles being represented.  However, if I had to pick another city that it looks like, it would have to be Amsterdam; particularly due to the house facades.  Gdansk, well at least the main thoroughfares of Old Gdansk, are awash with color.

During the tour, Martin told us stories of Kings, torture towers, gates, and merchants.

We learned about St. Mary’s Church, the largest brick church in Europe (and possibly the world), with its enormous pipe organ that Bach wanted to play but was rejected twice, and its astronomical clock that didn’t work for 500 years but was fixed in the 1980s only to stop working again a few weeks ago.

He told us about the Arsenal designed by a Dutchman that created a scandal because some of the statuary was symbolic in not the way intended; and the city hall with its 78-meter tall spire.

We learned that Daniel Fahrenheit, inventor of the mercury-based thermometer and Fahrenheit scale, was born in Gdansk.  Europeans still don’t understand his scale.

While down on the bank of the Motlawa River, we saw the Soldek, the first ship built at the Lenin Shipyard after the war.  It is moored in the river as part of the Nautical Museum but is mired in controversy.  Just as all the Lenin statues have been destroyed, there is a huge push for the Soldek to be destroyed – people don’t want reminders of the past. The decision will happen later this year.  I think it would be a pity to destroy it.

We also saw the huge Crane that could lift up to two tons of cargo using manpower in giant wooden wheels.  It’s the largest wooden harbor crane in Europe and was initially built in the 15th century.

Our final stop on this tour was in the area of the old post office.  The post office of Danzig (the free city of Gdansk) was established in 1920 under the Treaty of Versailles.  The Polish post office operated outside of the territorial borders of Poland.  The city of Danzig was itself a sovereign city-state.  It was also a desired stronghold by many a ruler, including Hitler.

In the early morning hours of September 1, 1939, while the German battleship Schleswig-Holstein shelled nearby Westerplatte, a military outpost, the Germans and local police rushed the post office.  Those inside defending the compound numbered just over 50.  The plan was to keep the Germans at bay for six hours until reinforcements arrived.  Reinforcements never came and after 15 hours, the post office was taken and anyone who remained was captured (and later tried, then executed).

According to photographic evidence, the postmen rousted from the building were lined up against the back wall.  A chilling monument of their fingerprints touching the wall exists as a reminder of the beginnings of the war.

Not too far from the building, a larger monument to the Defenders of the Polish Post Office was erected.

After the tour, I retraced my steps back through the old town enraptured by the architecture.  I allowed myself to be swallowed up by the St. Dominic’s crowd and eventually made my way back to the apartment just in time for the delivery of the promised fan.

All in all, a good day, in a new city with which I believe I may fall in love.