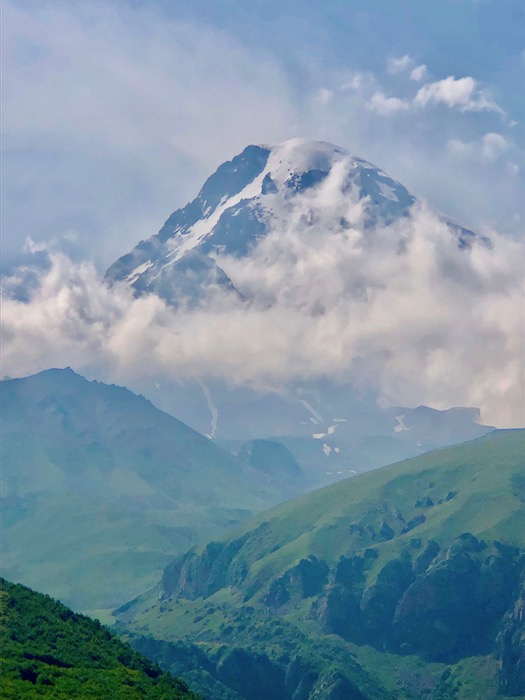 Moods Of The Mountain

This morning’s group of international tour-goers consisted of Marco from France (but with an Italian bloodline), Takumi from Japan but now living in Germany, Rhodri from Northern Ireland (but originally from Wales), and Aaron from Wisconsin.

Our guide was Giorgi, a 19-year-old student of International Relations from Georgia.  The group got along famously and Giorgi kept us engaged in conversations about current affairs, politics, and everything else you can think of.  Giorgi was also quite knowledgeable and eager to tell us anything we wanted to know about his home country.

The tour, called Embracing Georgia, took us along the Georgian Military Highway to Zhinvali/Jinvali, Ananuri/Ananauri, Gudauri, the Russia-Georgia Peace Monument, Kazbegi, and the Gergeti Trinity Church.  The scenery was absolutely stunning as we ascended from 2500 feet to approximately 8900 feet above sea level.  It was an ear-popping good time.

The route taken by the Georgian Military Highway has existed since before the 1st century BC; however, Russian soldiers didn’t convert it into a passable road until 1783.  It is the route taken if you want to drive to Russia.  It can often be busy because it is the only land route from Armenia to Russia and is heavily used by commercial vehicles.  It is also the easiest route from Tbilisi to the high Caucasus Mountains, particularly for skiing in the winter.

Our first stop along the Highway was the Zhinvali/Jinvali Reservoir, about 45 minutes north of Tbilisi.  Built over several years by flooding a valley, the construction of the reservoir was wrought with controversy since several villages are now sunk below the surface.  Originally, the Ananuri complex was in danger of being flooded as well, but protests were successful in saving it.  When water levels are low, apparently you can see the cross at the top of one of the villages’ churches.  Despite the destruction caused, the site of the reservoir is gorgeous.

On a bluff overlooking the reservoir stands the Ananuri/Ananauri castle and fortress complex.  Initially, Ananuri was a castle complex of a feudal dynasty who ruled the area in the 13th century.  The fortress itself has seen many a battle and remained in use until the 19th century.  The walls of the fortress are crumbling in many places, but that didn’t stop the gazelles of the group from bounding up them to explore the fortifications.  I took a little more time since the access was sketchy in places and I have a fear of heights.  Up in the tower, however, the views of the church domes and the reservoir below are nothing less than spectacular.

Inside the churches, portions of frescoes remain; the rest were destroyed in fires in the 18th century.

Contrary to other churches I’ve visited in Georgia, the outside of the larger Church of the Mother of God is more fascinating than the interior.  A large cross is carved into the south wall.  Along with the stylized cross, there are carvings of dragons, lions, angles, vines, and deer.  It is amazing that the incredible details of the carvings have existed so long.

Before leaving, a few of us ventured out on the bridge.  Although it has a dedicated pedestrian walkway, there are a few portions where the asphalt is missing and you can see down to the lake below as you step over the hole.  The bridge also shakes quite a lot as the commercial trucks whip by.  Frankly, I lasted only long enough to take a few pictures of Ananuri and have my picture taken so I can say I was there.  Then it was back on to more solid ground for me.

The scenery along the Highway on our way up in elevation was magnificent.  Green mountains with rocky parts showing through here and there, a hill dyed pink from the sulfur and minerals in the water running down the hillside, and lots of hairpin turns.  Thank goodness we had a great driver.

We passed through Gudauri, one of the two major ski resorts in Georgia.  The population hovers around 55 people, but in wintertime, you can’t find a place to park your car.  Although they’ve started offering some summer sports such as hiking and mountain biking, they really have an untapped market.  Currently, there is a lot of construction as the world finals of extreme winter sports (not the X-Games) will be held in Gudauri in 2020/2021.

On a promontory overlooking a huge forested gully, is the Russia-Georgia Friendship Monument.  Built in 1983, it commemorates 200 years of “friendship” between the two nations.  Many people scoff at the “friendly” nature of the relationship, but the monument and its location are quite breathtaking.  Just down the highway, there is a spot where paragliders take off and while flying like birds, they come very close to the monument.  A thrill I don’t think I’m brave enough to take.

The Monument itself depicts scenes from Russian life and fairy tales on the right side, scenes from Georgian life and fairy tales on the left side, and in the middle are a mother and child supposedly depicting Mother Russia and the child-like Georgia.  Several more scoffs can be interjected here.  While we were there, it was amusing to see a gentleman dressed in Mongol attire, holding a Georgian flag, talking on his iPhone, while listening to the soundtrack from the Game of Thrones.  Despite some of the commercialism, it was a very lovely stop on our way up higher in the mountains.

While I was trying to take a panoramic shot of the monument, our tour leader Giorgi said it couldn’t be done, at least when he tried it.  I guess I just have the touch.

By the time we got to Stepantsminda (aka Kazbegi), it was time for lunch at another local home – always the highlight.  Although water supplies to the area had been inadvertently cut by some local construction, our hostess deftly managed to set out a spread for us.

Before we could eat, however, we had to assist in finishing the khinkhali, dumplings filled with ground meat that ends up making a broth inside the dough pockets when boiled.  Our hostess rolled out the dough, placed spoonfuls of meat on the rounds, and then showed us how to pinch the dough to form the dumpling.  Then it was our turn.  Although our attempts were passable, they were not as clean looking as the ones our hostess made three times faster than we could make one.  It was all great fun though.

Then we ate … and drank.  The pitcher on the table that looks like ice tea is not.  It is amber wine homemade from every part of the grape include seeds and stems.  Next to it is a crystal decanter of chacha which, although it is called Georgian vodka by some, is actually made from grapes and is more like Grappa.  Wines hover around 15% alcohol content while chacha ranges from 35-85% alcohol content.  In Georgia, when the tamada drinks, everyone drinks, and it’s usually bottom’s up (a full glass in a gulp).  Since I don’t usually drink alcohol, I only sampled a little bit so as not to be rude – I certainly didn’t do bottom’s up.  Giorgi taught us that before drinking a shot of chacha, you bit a hole in a khinkhali and drink the liquid in the dumpling.  Then you take a shot of the chacha, then eat the remainder of the khinkhali.  Something in the dough/meat combination takes some of the bite out of the burn the chacha causes down your throat.

The meal was phenomenal and the company was entertaining.  Aaron, Marco, and Giorgi kept the conversation flowing throughout the meal.  It’s amazing how quickly a group of people can bond during a day tour and a meal.

Shortly after we left our hostess’ home, we came to the trailhead leading up to the Gergeti Trinity Church.  The guys got out of the van to start the hike, but I remained in the vehicle with our driver because I turned my left knee on a hike the day before.  While the men hiked the steep hill, I rode the hairpin turns holding onto the armrest with white knuckles.  As the village down below became smaller and smaller in the distance, the turns seemed to get more frequent.  Taking each turn, some of them blind curves, our van had to veer into the oncoming lane.  I held my breath each time hoping that there were no vehicles coming down off the mountain in our direction.  Not sure what holding my breath did, but we were lucky to avoid any collisions with vehicles and cows.

Have I mentioned the cows?  In Georgia, there are no fences penning in animals away from the streets, so cows, chickens, horses, pigs, sheep, goats, dogs, and anything else wild can roam free.  At any time, there could be a cow or a herd of cattle standing or sitting in the middle of the road blocking traffic; you just have to wait until they move.  The rule is, if there is a government placed sign warning of “cow crossings” within 400 meters or so and you hit a cow, you have to pay the owner of the cow.  However, if there is no sign and you hit a cow, the owner of the cow has to pay for the damage to your vehicle.  I’d be interested to hear some of the discussions when it’s iffy as to the placement of cow signs.

As we drove over the last hill, the Gergeti Trinity Church stood out on a bluff.

While it was lovely, it was Mount Kazbek off in the distance that was breathtaking.  Giorgi told us that we were lucky to see the top of Kazbek (elevation 16, 558 feet) through the wispy clouds – on his many tours, he had only seen the top one other time.  As I stood there, the clouds drifted around the mountaintop and glacier.  With each different cloud formation, Kazbek took on a different look evoking a new mood each time.  I was mesmerized and could have stood watching the mountain change for hours.

I met the rest of the group near the entrance to the church after their hike.  The church itself was a nice example of Georgian architecture but, considering its location, it took second place to the scenery.  A monk stood outside the entrance evaluating everyone’s attire to determine if they needed to cover up to enter the church.  The men had to don scarves over their shorts and women had to wear long scarves over their shorts and pants and scarves over their hair.  The monk was very insistent and even a bit aggressive with those who didn’t want to follow the protocol.  In the end, the monk always won.

We spent a fair amount of time at Gergeti appreciating the scenery and watching the top of Mount Kazbek fade in and out of the clouds.  Despite the number of people, it was peaceful.

Eventually, we piled back into the van (you can hike back down… but we didn’t) and drove to the lower parking lot.  We saw a group of mountaineers who were being driven up to base camp before climbing Mount Kazbek.  Apparently, they have to acclimate for at least one day at Gergeti’s elevation before attempting the ascent.  Our stop at the lower lot was not to see the climbers; it was to take photos of Gergeti Trinity Church with the green hill leading up to it.  It’s the postcard-worthy shot everyone wants to have.

It was beautiful, but I’ll take watching the changing moods of Mount Kazbek over the postcard shot every time. 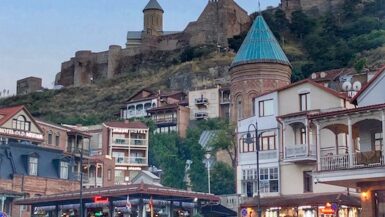 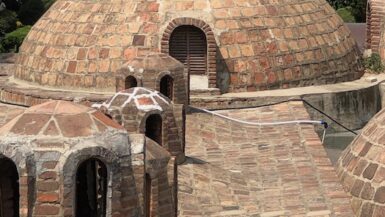 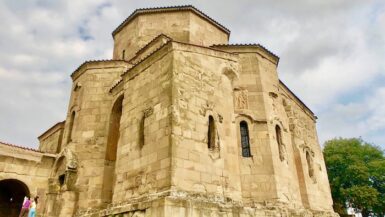 Multiple Weddings And A Baptism