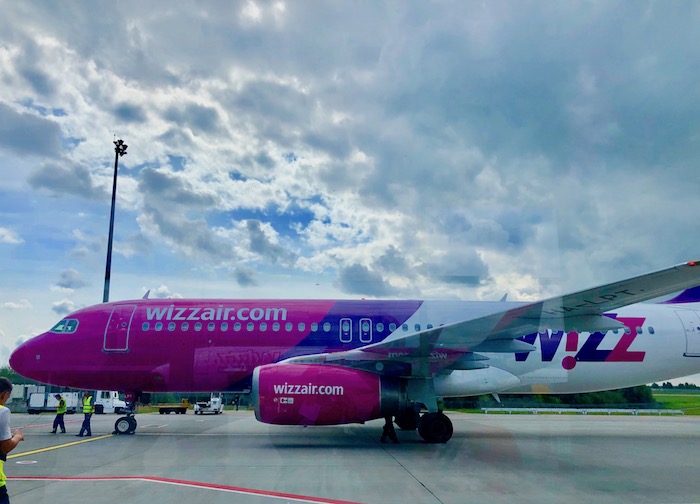 A Plane, A Bus, And Self-Care

As usual, I arrived at the airport in plenty of time.  Lviv’s airport looks new and has wide-open spaces.  It also has a large board conveniently located in the middle as you come in that tells you which agent stations are assigned to certain flights.

My Wizzair flight was assigned to stations 23 and 24.  I trotted off to find the specified desks and found a pretty large queue already formed.  I had purchased a priority ticket because I wanted an extra cabin bag, but I was pretty sure that it meant I also had priority check-in.  There was a lot of confusion as people started forming different lines for unknown reasons.  Just as I was getting a little frustrated with the disorganization, another agent stepped up to station 22 and switched on a little “priority” light.  I immediately changed lines

I started to get worried about the weight of my carry-ons as I noticed people going to an empty station to weigh their bags.  When it was my turn with the agent, he looked at my backpacks and said, “checked bags?”  I replied that I’d like to carry both on if that was all right.  He looked at my bags again (not the weight) and said, “as you wish.”  Score! I didn’t have to check my bags.  I’m glad I paid the extra few dollars for priority.

Security and passport control took all of five minutes and then I had time to wander.  There isn’t much to see once you get through security – a few shops, a few fast food-type restaurants, and a huge children’s play area.  My stomach growled, so I decided to check out breakfast options.  Breakfast seemingly isn’t a thing in Eastern Europe – my options, other than coffee, were hot dogs or … hot dogs.  I went with a hot dog.  They are a bit different though – the bun is round and closed on one end, the condiments and weiner are then stuffed into the open end.  It actually makes sense and is a whole lot less messy than the ones we get at home.  I was super excited when the counter-girl asked if I wanted mustard, ketchup and/or mayonnaise.  My husband will cringe at this, but I like ketchup and mayonnaise on my hot dogs.  I was in heaven.

Our gate was changed a couple of times, but we ended up going out of gate 9.  They made an announcement about 50 minutes before the flight was to leave that priority flyers could check-in.  As I approached the gate agent, I spied the luggage “sizer” and was once more apprehensive that I would be made to check one of my bags.  I’ve heard that is a thing with Wizzair.  The agent didn’t even look my way when I scanned in – she only checked to make sure that my boarding pass was stamped “priority.”  Down the elevator and into a holding pen we went just as our aircraft pulled in from wherever it had been prior.

From the time the passengers on the previous flight disembarked to the time it was ready for us to embark was 13 minutes.  That would never happen in the US.  Our entire airplane was boarded and buckled in 10 minutes before we were supposed to take off, and we were wheels up just as it turned noon, our designated takeoff time.  Again, almost never happens in the US.

So, about where I was seated.  I was in the second row on the aisle.  Here’s my view.

See anything missing?  Maybe a seat back for the seat in front of me? Not sure what had happened, but there was no seat.

I thought about what I would do if I needed a tray table, but since it was only a 40-minute flight, it probably wouldn’t be an issue.  Just as we were pushing back from the gate, the head flight attendant asked if I would kindly move to the empty seat in the first row “for safety.”  OK.  This was my new view.

Less than 40 minutes later, we touched down in Krakow.  We arrived about 10 minutes ahead of schedule, which was fine by me since I had to be at my bus no later than 12:25.  I was through passport control within 10 minutes and made my way outside only to find a row of buses, all with a sign that it was going to Krakow.

I recalled that there was a logo on my confirmation, so I started at one end and worked my way back until I found a sign that looked like my logo and held out my confirmation to the man leaning up against the mini-bus.  He smiled, gave me a thumbs up and removed my backpack to place into the cargo hold.

I watched as the Polish countryside whizzed by on our 1-½ hour trip to Krakow.  At one particular intersection, I remarked to myself that it could be in any US city – there was a large McDonald’s on one corner and a Circle K gas station right next door.

I wasn’t quite sure where the mini-bus was going to drop us off in Krakow.  I was prepared to take an Uber.  When we arrived at the railway parking lot, I type the address of my apartment into navigation and found that I was only a seven-minute walk – that’s convenient.  I followed the navigation through a portion of the rail station and bus terminal, then outside down two streets and I was at my home for the week.  I buzzed myself in with the code I’d been given and found myself in a lovely courtyard.  And then I realized my apartment was on the 4th floor, with no elevator.  I really thought I’d checked out the elevator situation on my rentals – apparently, I did not.

The apartment under the eaves and so the headroom would be difficult for someone taller than me.  It’s cute, roomy, has a comfortable bed, and a private bathroom (this I’ve found is crucial for me).

It also has a washing machine.  I threw in a load and then went to find the closest grocery store to get some snacks and water.  As I turned left out of the building, I spied an Express, which is a mini-mart.  It would do.  Groceries purchased, I lugged them back up the four stories.

I’ve been really careful about what I eat and drink since I often have stomach issues when I travel.  I only drink bottled water or water I’ve purified in my portable Grayl, and use it for brushing my teeth, etc.  I drank two of the bottles of water I purchased at the store and noticed that it tasted a bit weird.  But, I figured I was safe because it was bottled water.  Not even an hour later, my stomach was not happy.  The rest of me was not happy for the next 24 hours or so.

I hadn’t planned anything for the evening of my arrival, so staying in the apartment, in bed wasn’t a problem.  I had, however, booked a tour of Old Town for 10:00 a.m.  I canceled about an hour before I would have had to leave.  I was disappointed, but I knew that it was best that I stay in – touring isn’t fun if you aren’t feeling yourself.

By noon, I was feeling a bit better, although I was weak.  I was scheduled for a 2:00p tour of the Jewish section of the city and had to decide whether to go or not.  I rallied my energy and off I went – it probably wasn’t my best decision.