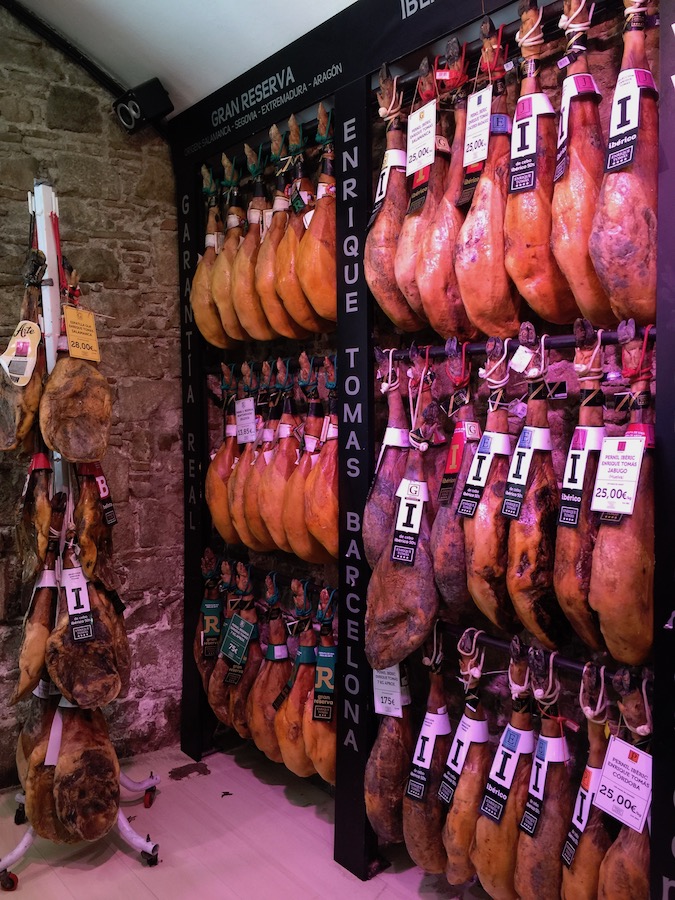 Jet lag doesn’t usually get to us, but we both had a bit of a problem staying asleep last night despite the great beds.  So, when the friendly voice on the other end of the phone proclaimed it time to wake up, we had mixed feelings.  Nothing that a shower under the biggest rainfall shower head I’ve seen in a while couldn’t fix.  After a very light breakfast down in the sunroom of the hotel, we packed our day pack and headed out.

Today’s adventure:  a food tour with BarcelonaFoodTour.  We had been told to come hungry.  (Foreshadowing)

A short taxi ride to Placa de l’Angel brought us to the starting point of our Gotico Brunch.  Kaye, an energetic foodie from London who moved to Barcelona four years ago for a slower paced life, met us.  Kaye gives 3-4 food tours a week and has a career coaching business on the side when she’s not off on month-long vacations to exotic surrounds.  Fluent in both Spanish and Catalan, Kaye was a terrific guide to the ins and outs of the gastronomic wonders of Barcelona’s Gothic District.  She was also a fountain of historical information as we wound our way along the narrow streets and alleys between cathedrals, Roman ruins, and quaint squares.  Oh, and did I say, it was a slow day, so we were a tour of two. I love private tours.

Our first stop was Pastisseria La Colmena, which has been sweetening Barcelona since 1849.  Originally known for its homemade caramels, it now also bakes a variety of pastries, shortbreads, and meringues in the small bakery in the back of the store.  Kaye described each of pastries in the window in detail, down to which saint’s day or holiday during which Barcelonès typically eat them.  The smell in the shop was divine, albeit a little overwhelming.  Kaye selected a small shortbread each and a crispy pork pastry (piggies don’t stand a chance in Catalan – they are in everything).

We took our goodies and walked a short way up the alley to Dibar Cafe, Kaye’s favorite coffee roaster so that we could have coffee and tea with our pastries.  The cafe scene is big in Barcelona – coffee bars in the morning, tapas bars the remainder of the day.  I’m not sure anyone actually works as cafes seem to be packed all day long.

Across the alley, Kaye pointed out a shop with some unusual figurines in the window.  Each figurine had its buttocks exposed as if he/she/it was going to the toilet, but there wasn’t a toilet, only a pile of poop.  The subjects of the figures were politicians, celebrities, soccer players, cartoon characters, and traditionally attired folk.  Kaye explained that these figurines were called Caganer.  In Barcelona, it is considered good luck to place one of these figurines in your home’s nativity scene at Christmas.  The figurine is meant to represent the “fertilizing of the earth” – thus, the poop.  (Check out caganer.com, if you don’t believe me).  Now if this wasn’t enough, for Christmas Eve, parents get their children a large Caga Tio – a Pooping Log – which they cover with a cloth and let the children beat it with a stick to get it to poop out presents and sweets (like a pooping pinata).  Not sure who dreamed these traditions up, but it’s good sh*t.

Our next stop was Torrons Vicens, artisan nougat makers since 1775.  We were offered samples of the traditional crunchy/chewy nougat with nuts, the Catalan favorite which tastes like a solid piece of creme brûlée, and the more modern chocolate versions.  The flavors were dense but sweet.

We were beginning to learn how much they love their sweets here.  But those strong flavors were nothing compared to what was to come – Chocolate and Churros.  These are not the same Churros you can buy at the county fair.  Yes, they are fried dough sprinkled with sugar, but that’s where the similarities end.

Kaye took us to a tiny hole in the wall storefront where an old man stood over a large cooker hand shaping the dough into small loops as they slid into the fryer.  The owner, a tiny old lady, insisted we wait for fresh Churros, while she sold the remainder of the old batch to the people behind us.  The freshly fried dough was dumped into a paper cone and we were off to yet another small cafe to get the best dipping chocolate.  The chocolate (xocolate in Catalan) comes in a small cup, is a deep rich brown color, and is unlike any hot chocolate we’ve ever had.  It’s not even like the sipping chocolate we’ve had throughout Europe.  It’s on the bitter side as it is as close to 100% chocolate as can be – no sugar added.

When you dip the hot sugary churro in the chocolate, the sweet and bitter collide into a mouthful of joy ~ cue the Angel Choir.  Steven tried his chocolate straight up. I, on the other hand, am a chocolate wimp, so they made mine a children’s Chocolate Swiss (half chocolate, have whipping cream).  It was still mouthwateringly decadent.

We were already full, but we had only just completed the sweet portion of the tour and were on to the savory part of the tour for an appetizer, and then lunch.

Ham reigns supreme in Catalan.  Huge hogs are put out to pasture to fatten up on nature, particularly acorns.  Kaye took us to Enrique Tomas to school us in all things jamon.  She described the differences between Serrano, Iberian, and Belota hams – basically the kind of pig, what they eat, whether it’s from a front leg or hind leg, and the curing process. She also described the differences in the types of sausages made from different portions of the pigs that don’t make the jamon cut.  We were given a large tray of different kinds of cheeses, ham, and sausage to sample.  Such a spread and this was only the appetizer.  While we were sitting in the back of the shop eating our charcuterie, locals came and went with pieces of ham and cheese in paper cones – Catalan fast food.  Steven also got to try a glass of a local dry red wine which paired wonderfully with the fatty goodness of the swine and cheese.

Properly schooled, we were on to our last stop of the tour, Tapeo for tapas. Nestled at a table in the back, surrounded by local families, Kaye talked over the menu with us to pick the perfect tapas for us to try.  We shared small plates of thinly sliced leeks drizzled with olive tapenade, patatas bravas (potato cubes with aioli and spicy tomato sauce), Iberian pork ribs rubbed with a honey glaze, and Catalan Cannelloni stuffed with local sausage and draped in a creamy mushroom sauce.

Each plate was a delectable as the next, but I think our two favorites were the ribs and Cannelloni, with the leeks coming in a close third.  We were stuffed and couldn’t eat another bite, but Kaye made us try a Catalan creme (twist our arms).  The creme was light as air and foamy with golden sugary pieces on the outside, kind of like a foamy creme brûlée.  Yep, that capped it off; we were officially food zombies.

Kaye was a wonderful guide for our five-hour tour – she was witty, full of life, quite knowledgeable, and exuded so much love and pride for her adopted city.  If ever in Barcelona, we highly recommend a tour with her. With sadness, we European cheek kissed her goodbye, with her promise to send recommendations for restaurants in Seville and Madrid.

We needed to walk off some of what we had eaten in the previous hours, so Kaye pointed us in the proper direction, and we wandered off, stopping to look at impressive architecture along the way.

We arrived back at our hotel without incident.  And then, we each collapsed into a food coma and slept for three hours.  All Hail the Piggy!