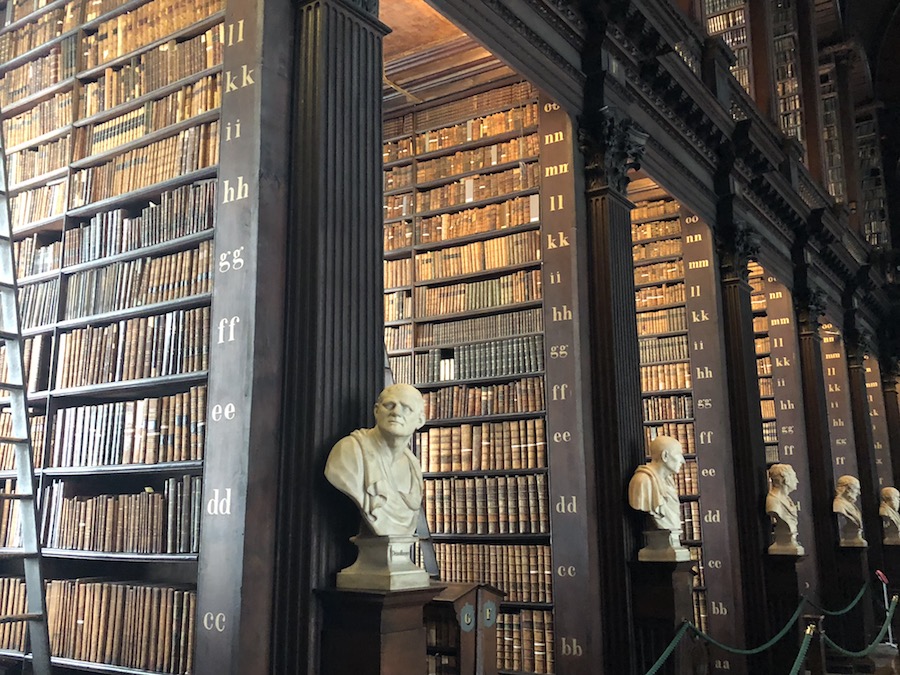 The Book Of Kells And A Library Full Of Other Books

The beauty of getting up early to join a group in the queue well before the library at Trinity College opens is that you not only have the benefit of being one of the first in the door to see the Book of Kells, but you also have the benefit of a tour guide who instructs you to go straight to the Treasury where the manuscripts are located bypassing the exhibition hall where everyone else stops.  Due to this knowledgeable tip, I was the first one into the guarded Treasury and had a prime viewing location directly in front of the small display case.

Unfortunately, it turned out to be a “Mona Lisa” moment because you only get to see a small portion of the Book of Kells manuscripts and since they are under glass and the room is darkened to preserve the delicate vellum on which they are drawn, the view is underwhelming.  I can’t imagine trying to come later and having to push through the crowd to get a less than adequate view of what are supposed to be an incredible work of art (plus, pictures aren’t allowed in the heavily guarded room).

The exhibition, which we went into after gaining our view of the actual piece of art, was quite good and explained what couldn’t be seen due to the security around the manuscripts.  It is well worth spending time in the exhibition reading the explanations of the pertinent pages of the manuscripts.

So, what is the Book of Kells anyway?  It is a set of the four gospels of the Bible meticulously written and illustrated by groups of Irish monks hunched over poorly lit desks in a drafty stone church on the remote Scottish island of Iona over 1,200 years ago.  After Vikings pillaged and burned Iona, killing a bulk of the monks, the survivors fled to the the Abbey of Kells near Dublin to complete the manuscripts.  It has been called the finest piece of art from the Dark Ages.

It is absolutely amazing that any portion of these manuscripts exist today.  The pages are made of thin, hand-prepared vellum and the inks and dyes were made from precious metals and stones (including Lapis, which was extremely rare and costly back then).  It turns out that some of the inks were deadly as they contained highly toxic metals and since the monks would wet their brushes on their tongue before and after pen strokes, monks were slowly poisoned.  But based on the colorful page enlargements scattered throughout the exhibition, the result was/is spectacular.

The highlight of the library tour for me was the Long Room, located on the upper level that is a 200 foot long chamber of the Old Library that is stacked all the way up to its barrel ceiling with over 200,000 old/ancient books.  It is spectacular and shouldn’t be missed.  Long touted as one of the premier libraries in the world, it is an iconic setting that has taken center stage in many movies, including Harry Potter and Star Wars (although use of the images in Star Wars movies has been the subject of litigation).

This is not the type of library where you can go in and check out the books, or even touch them.  There is a small number of individuals who work on the preservation of some of the books, but most remain untouched just sitting on their shelves.

Our tour guide was actually allowed to turn the pages of a first edition of Shakespeare’s works (from the early 1660s) – he let us in on the secret as to where it sits within the library (see the tall book to the left of the two green boxes on shelf cc in the photo below).

Busts of famous Irishmen (no Irishwomen) anchor different partitions of bookshelves.  Our guide pointed out the bust of Thomas Lefroy, reputed to be the love of Jane Austen and the man on which she based the character Mr. Darcy.

They never married because his family didn’t find her to be a suitable mate, but ultimately, in a show of his love, he named his daughter (by another woman who became his wife) after Jane.

I could have stayed in this portion of the library for the remainder of the day.  It was well worth the admission price.

After leaving Trinity College, our guide took us on an abbreviated tour of the city center.  Unlike the guide from the city tour on my first day, he didn’t try to stuff facts and figures into our head.  Instead, he was full of stories that made grasping the history easier and much more fun.

At the end of the tour, which left off at Dublin Castle, I walked the extra distance to St. Patrick’s Cathedral, which had eluded my exploration on prior days.  St. Patrick’s was originally a Catholic Church, but was later passed on to the Anglicans after the Reformation.  Built in the Gothic style, the church is a little austere, but contains lots of stained glass and statuary.

I’ve heard that the acoustics are fantastic and, although I didn’t do it, I would suggest visiting for one of the services, such as Evensong, to hear one of the choirs and the renowned organist.  If you attend one of the services, I don’t think you have to pay the admission price, but can stay afterwards to look around the interior of the church.

The weather had turned a little dismal and was drizzling heavily off and on.  Since I had seen much of what I had planned to see in Dublin, I decided to take a leisurely walk back through town, go to the grocery store to pick up some tea I’d seen earlier, and then take a nap before packing.  I meandered through backroads and alleys, seeing a bit of a grittier side of Dublin, but finally made it to the Tesco store down the road from my hotel.  I even remembered to bring a plastic bag so I didn’t have to pay extra at the store.

My nap was needed as I fell fast asleep for several hours.  Around dinner time, I awoke and headed back out for my final dinner in Dublin, which I had decided would be fish & chips.

The best fish & chips is something debated by Dubliners like Texans debate the best BBQ.  I wasn’t feeling adventurous enough to head to the opposite side of town to check out some of the restaurants previously recommended to me, so I opted to stay close and went to Kingfisher, advertised as the “Best Fish & Chips in Dublin.”  Not having eaten at any of the other fish & chip vendors who also say they are the “Best,” I really can’t give a ranking; however, the fish was flakey and not dry and the batter wasn’t too heavy.  Portions are huge, so I was only able to eat a third of what came on the plate.

Packing took very little time, although sorting through all of the receipts and promotional material I’d picked up along the way took a little more time.  Once packed, I looked at my luggage and decided, against the advice of my inner voice, to check my suitcase the next morning so I wouldn’t have to futz with it during the flights home.  Spoiler alert – this wasn’t my best decision. 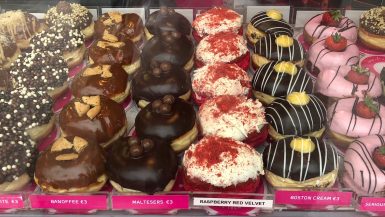 Some Days Are For Chillin’