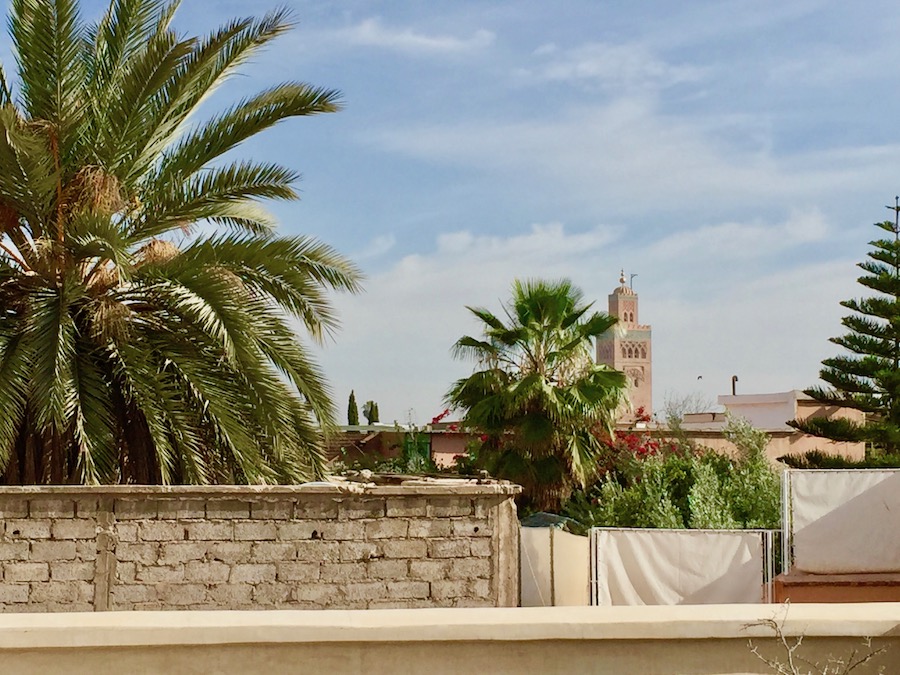 Our last breakfast was served on the upstairs terrace while we bid farewell to the storks in the local minaret.  Azziza had made arrangements for our transfer to the airport, so she waited to walk us to the meeting point.  Just as we were leaving, she received a call from the driver to say that, because it was May 1st and “Labor Day,” there was a strike involving a large group of people, so the roads in and out of the gates were clogged.  This meant we had to walk a further distance outside the gates to get to our vehicle.  We were definitely sweating by the time we reached our vehicle.  With a sad goodbye to Azziza, we were off to the airport.  As we were leaving, we saw busloads of people coming in for the strike, so we were glad to get out when we did.  Still not sure who was striking or for what cause they were striking.

The ticketing area at Marrakech airport is deceptively large.  We had to go through a maze of desks to find the British Airways counter.  We were lucky to be flying business class as we had a dedicated line and didn’t have to wait with the masses in the general ticketing line.

Once we had our boarding passes, I asked the ticketing agent for help in changing our seats for the next day’s flight from Heathrow to Philadelphia. Checking in online had resulted in seats that weren’t together.  She seemed very helpful and handed us tickets for seats together (spoiler alert – I should have looked a little closer).

On our way through security, the agent stopped me and quizzed me on my French language skills since he saw on my security paper that I was born in Canada.  I must have passed or I seemed too pathetic to waste time on because he passed me through.

We had thought that we would be able to exchange our Moroccan money once we were through security – we were wrong.  Apparently, this needed to be done before passing through security.  We were advised we could go back and retrace our steps, stand in line to exchange the money, and then stand in line to get through security again.  Not going to happen. Instead, we asked for directions to the Lounge, which was postage stamp sized and could not handle the number of guests that poured into it.  We were lucky to find two seats together to wait out our time until departure.  We did have a choice of beverages, mini sandwiches, and cookies if we so chose.  After a harried boarding, the flight to London Gatwick was uneventful.

Upon arrival at London’s Gatwick airport, we had to pass through customs/immigration and picked up our luggage since our onward flight was not until the morning from Heathrow.

At immigration, the agent asked me for the boarding passes to verify we had an onward flight.  I handed her the boarding passes the British Airways agent had given me in Marrakech.
“These tickets are for today – May 1st,” the agent said.
“But we aren’t flying until tomorrow, May 2nd,” said I.
“These say they are for today and that your flight was to take off four hours ago,” said she.
“But that would have been before we took off from Marrakech,” I said.
“I agree that doesn’t make sense, but nevertheless, the tickets are for today,” she replied.
“Well then, I guess there was a printing error because our itinerary clearly says we leave from Heathrow tomorrow,” I replied.

Luckily, I had a copy of the itinerary because I think that’s the only reason she passed us through with a cautionary remark to contact British Airways well before our flight to figure out the issue.  By this time, I was a bit freaked, but we managed to gather our luggage at the carousel and find the driver I had pre-arranged to transfer us from Gatwick to the hotel at Heathrow.

Safely tucked in our room at the Skyline Sheraton Heathrow (thank you SPG points), I pulled out the boarding passes that were causing us headaches so I could contact British Airways.  I first logged on to pull up my itinerary.  It said we were traveling on May 2nd – that’s a good sign.  Even better, the seat assignments showed us in 12A and 12B, which were side by side in Business Class.

I hadn’t noticed the tickets were for someone else or for the wrong day; I had just been so happy we would be sitting beside each other.  Even more interesting and/or scary, while the immigration agent had seen that the tickets were for May 1st, she hadn’t noticed they were for two totally different people than the ones identified in the passports she was holding. Lesson learned – verify/double-check everything.

Breathing sighs of relief, we decided we were hungry and, since we were in London, we should have fish and chips.  Down to the hotel’s pub we went, passing by a huge Indian wedding reception in the conference rooms (we didn’t think we were dressed appropriately to do an effective crash).  Our meal turned out to be the most expensive of our entire trip – two sodas, two bottles of water (have to keep hydrated), and two orders of fish and chips for about $65.  Mind you, they were darned good fish and chips, but I’m not sure they were worth that much. That’s what you get for eating at a hotel restaurant.

We arrived at Heathrow in the morning with enough time to chat with the ticketing agent (we seem to get very chatty ticketing agents) and then go on to the British Airways Lounge, a perk for flying Business.  Actually, the receptionist at the lounge advised that we could stay in that Lounge or, if we wanted, there was a Lounge closer to our gate.  We decided to do both. Why not, we had enough time!

Our seats on the plane were side-by-side, facing each other; however, whenever I had to get out of my seat, I had to jump/crawl over the legs of the gentleman sitting behind Steven as he had immediately, upon the plane reaching altitude, laid his seat flat and was out cold.  A little inconvenient, but luckily I only had to contort myself twice to get across his sleeping form. Otherwise, the meal presentations were nicely done, the food was tasty, and the service was stiff upper lip British.  I watched four movies and most of a television show before we landed in Philadelphia; Steven was able to get some long periods of shuteye between media viewings.

Upon arrival in Philadelphia, we passed through immigration/customs again and picked up our luggage to transfer to our connecting flight. The agents were grumpy and none were in a joking mood – we were definitely home.

We had to even go through security again before getting to the transfer area.  Philly was the only airport in 18 days, several flights on several airlines that stopped my bag for a tiny tube of anti-bacterial cleanser forgotten in the bottom of a pocket in my backpack – you’d have thought I had a ninja sword in my bag.  But, I guess they were just doing their jobs.

After hauling our bags down a long corridor, we interrupted a chatfest among a group of disgruntled American Airlines agents at the transfer desk and then went on our way looking for the lounge as we had another 3 ½ hours to waste.  The directions we received were a bit convoluted, so we stopped at the information desk, only to interrupt the desk agent’s animated conversation with a family member or friend to get a grunt and a finger point in the proper direction.  We were definitely home.  3 ½ hours in Philadelphia is a bit too long of a layover, but it was nice to have space to spread out and unlimited liquid choices.

Our last leg of the journey was, as it turned out, the most unpleasant even though it was in First Class.  We had the joy of having a man, woman, and their two children under the age of three in the row behind us. Unfortunately for Steven and me, neither child wanted to sit with dad on the other side of the aisle, so they both piled into the seats behind us with mom.  And they howled, cried, screamed, sang loudly, shouted, shrieked, and kicked the backs of our seats for the entire 5 ½ hour flight home.  I understand it is difficult to travel with children, however, dad plugged in his headphones, slept, and totally ignored his two terrible twos. Mom just sat there shrugging her shoulders like there was nothing she could do with the 24″ monsters. The daggers I shot with my eyes bounced off her as she never once told her children to be quiet.

Our saving graces?  Noise canceling headphones (which are no barrier to a shrieking child) with the music turned up to ear-shattering decibels, comfortable wide seats, and the hot fudge and caramel sundaes served after dinner.

We were happy to land and hurried to get off before the family from h*@# tried to gather their explosion of junk.  For better or worse, we were home.