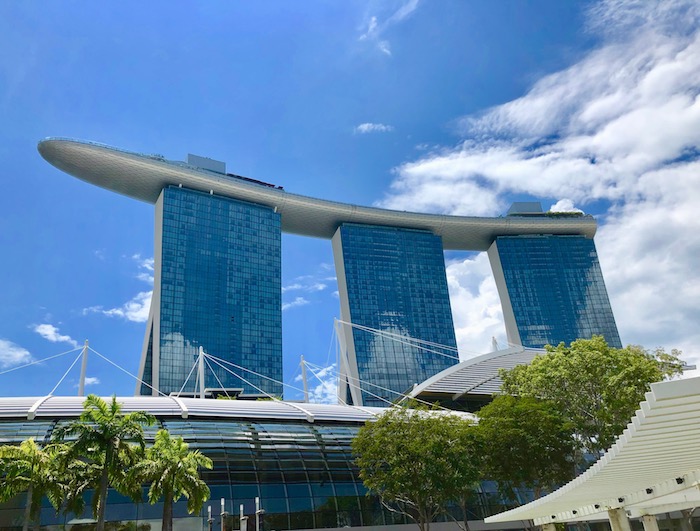 A Day Around Marina Bay Sands

Dawn in Singapore blossomed in pinks, oranges, and blues. From the top of Marina Bay Sands (MBS), the city yawned under a slight haze as it opened its eyes to a new day. The view from the famous rooftop pool was spectacular. Unfortunately, we weren’t the only ones with the idea of welcoming the day from the edge of the pool. Nonetheless, there was a peacefulness (particularly in the adults-only pool) to the sunrise.

As the sky lightened, the pool became a bit more crowded with the selfie-crowd (sunrise must have been too much for them). We marveled at the lengths they went to get that “perfect picture.” I’m sure we photo-bombed more than one as we swam some laps and relaxed at the infinity-edge taking in the marvelous view. Steven and I remarked that it is one of our favorite views to date in our travels. There’s just something fabulous about it.

Although we could have whiled away our day in the pool and jacuzzis until we were beyond pruney, there was just so much to see in and around MBS. Since breakfast didn’t come with the room, we made our way through the maze of the attached shopping center to the fancy food court. We’d heard that the food, while more expensive than true hawker centres, was equally as good. We indulged in some pretty good dim sum, which while pricey still didn’t break the bank.

Around opening time (10 a.m.), we headed outside to the ArtScience Museum. Surrounded by ponds filled with lotus flowers, the building itself takes on the shape of the petals of an open blossom. It appeared that someone was about to do some maintenance on the ponds or the lotuses themselves … or perhaps it was an art installation. We’ll never know because we went inside.

My activity of choice for the day was a series of art installations by teamLab, the same group that created the installation I came across in Helsinki last year. Future World – Where Art Meets Science is on permanent display at the ArtScience Museum, which is located just at the outside edge of the MBS shopping center. The woman at the ticket counter cautioned us that the exhibit is targeted toward the young; we told her that it was okay because we were young-at-heart.

Future World is a brilliantly organized series of digital art galleries. Each gallery has a different theme and allows participant interaction much to the delight of children and adults alike. As we walked through the room, waterfalls flowed around us, flowers grew where we stepped, and butterflies emerged from walls with a single touch.

Children slid down slides following gigantic pieces of fruit that exploded as fireworks when they landed at the bottom. There were lots of oohs, awhs, and gleeful giggles.

In the Sketch Aquarium, Steven and I used out coloring skills to create aquatic masterpieces.

After scanning our drawings, they magically appeared in the aquarium swimming around with all sorts of sea life. As juvenile as it sounds, there’s a true spark of childlike joy when you see your drawing come to life, twisting and turning among the others.

Some of the exhibits were not as colorful but had zen-like qualities as the art enrobed us. These rooms were a little quieter as they were too low-key for exuberant children.

Sketch City saw us coloring motor vehicles to be scanned in to move along the highways and byways of a make-believe town. I opted for a car while Steven opted to color a bus.

Other galleries breathed life into forests and skies filled with birds …

while in the Story of Time when Gods were Everywhere, images emerged where symbols floating down the walls were touched. We watched as children were amazed at the progressions.

I could have spent hours marveling at the digital creations, but there was so much more to see and do. Upstairs from Future World, we sat through a thought-provoking movie and walked through an exhibit on the effects of climate change (yes, it is real). I would definitely recommend a visit to the ArtScience Museum no matter your age.

Steven’s activity of choice was a trip to MBS’ casino – he loves casinos. Unfortunately for him, he lost most of his allotted cash. I, on the other hand, won a bit of cash. The photograph in the middle is a robot that delivers juice and water to parched casino-goers.

The casino is housed on three levels and is huge. It’s also quite artistic in design when viewed from above.

Right about the time I was taking the panoramic shot of the tables below, a casino employee started yelling at me. Unbeknownst to me, the Chinese characters behind the word “Casino” must say “no photos allowed.”

During his research on what to do around MBS, Steven discovered that there was an exhibition of Patek Philippe watches. Since admission was free, we decided to throw it in the mix of our activities. I hadn’t been too excited about going, but I was pleasantly surprised. The exhibition was very well done.

I had no idea the history or the beauty of the Patek Philippe brand. No wonder they have such a following and are so expensive. We learned all about the detail work that goes into making the watch mechanisms themselves, and the artistry that goes into creating the exterior designs. Queen Victoria was even a fan of their designs.

As we exited the exhibition, we came across this enormous art installation made of individually colored plastic flowers. It was amazing.

After a short afternoon nap, we headed towards Gardens by the Bay. Unfortunately, we didn’t have enough time before dark to visit the conservatories including the Flower Dome, which is the largest glass greenhouse in the world. More things to do on the next trip.

We arrived at the Supertree Grove just as night was falling. The trees stand anywhere from 82 to 160 feet tall and are home to numerous varieties of orchids, ferns, and other plants. Although awesome to look at during the day, they are otherworldly as the daylight wanes and they lit from within.

And then they come alive twice a night in a festival of lights coordinated to music. We had seen the show last night from our hotel room, but there was nothing like being on the ground underneath the giant trees as they sparkled. It was so much fun and just as exciting as a firework display.

Once the supertree light show was done, we followed the crowds out of the park, across several bridges, and to the harbor side of MBS for yet another light and music show – Spectra. We sat on the steps outside the shopping center facing the lights of downtown Singapore and were delighted as fountains danced to music and a laser light show sparkled on the harbor mist.

It was a spectacular way to end a fantastic day spent with the love of my life. Sappy, I know, but I’m getting that way as I get older. 🙂

Tomorrow we head off on our next adventure – a tour through parts of Vietnam.